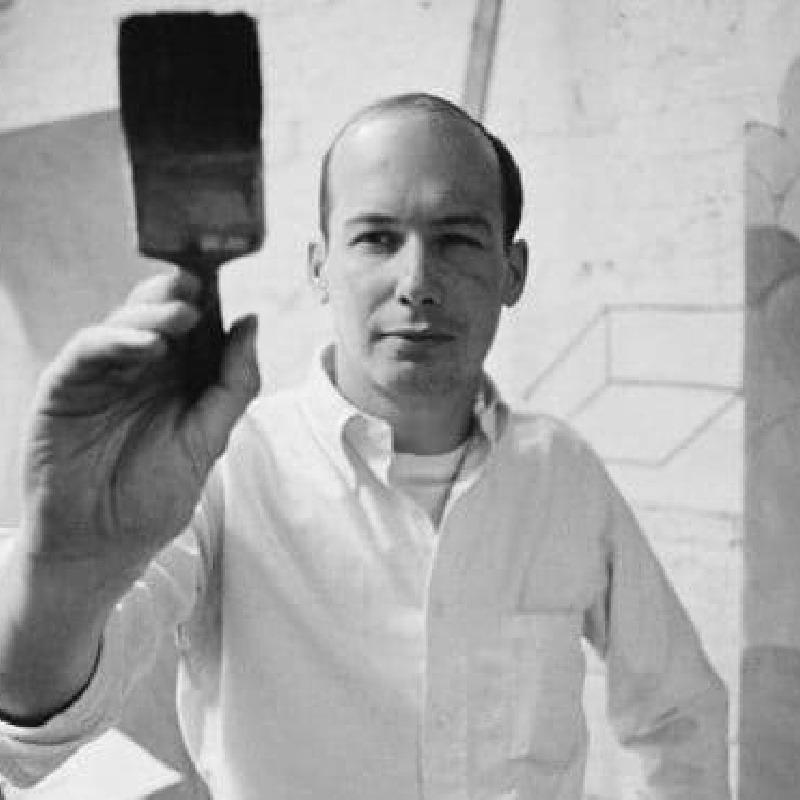 Charles Richard "Dick" Smith was an English printmaker and painter.

Smith was born in Letchworth, Hertfordshire, to Doris (née Chandler), a nurse and daughter of a chemical company director. He studied at Hitchin Grammar School and Luton School of Art. After military service with the Royal Air Force in Hong Kong, he attended St Albans School of Art followed by post-graduate studies at the Royal College of Art, London, from 1954-57. Smith shared a flat-cum-studio with Peter Blake in his second year at the RCA, and then again for two years after he left the college in 1957. When Terence Conran's Soup Kitchen opened on Fleet Street in the late 1950s, it featured a letter-collage mural by Smith and Blake. Michael Chow would later commission Smith to design installations for his restaurant in Los Angeles, and Chow and Conran have remained two of his biggest supporters.

In 1959 he moved to New York to teach on a Harkness Fellowship, staying for two years, where he produced paintings combining the formal qualities of many of the American abstract painters which made references to American commercial culture. The artist's first solo exhibition was at the Green Gallery. As his work matured it tended to be more minimal, often painted using one colour with a second only as an accent.

In trying to find ways of transposing ideas, Smith began to question the two-dimensional properties of art itself and to find ways by which a painting could express the shape of reality as he saw it. He began to take the canvas off the stretcher, letting it hang loose, or tied with knots, to suggest sails or kites - objects which could change with new directions rather than being held rigid against a wall, and taking painting close to the realm of sculpture. These principles he carried into his graphic work by introducing cut, folded and stapled elements into his prints; some works were multi-leaved screenprinting, and others printed onto three-dimensional fabricated metal.

Smith returned to England in 1963 - specifically East Tytherton, Wiltshire where Howard Hodgkin was a neighbour - and gained critical acclaim for extending the boundaries of painting into three dimensions, creating sculptural shaped canvases with monumental presence, which literally protruded into the space of the gallery. Evocative titles such as Panatella and Revlon, and cosmetic, synthetic colours alluded to the consumer landscapes of urban America which had proved so influential. He showed at the Kasmin Gallery, a venture between Kas and the Marquess of Dufferin and Ava in New Bond Street, throughout the 60s, more-widely known as David Hockney's first gallery.

After being awarded the Grand Prize at the 9th São Paulo Biennial in 1967 and important exhibitions at Kasmin in 1963, Tate in 1964, and Richard Feigen Gallery in 1966, Smith was invited to exhibit at the XXXV Venice Biennale as the official British artist in 1970. Smith was chosen by a committee of art experts, who were Director of Tate Norman Reid, art historian Alan Bowness, art collector David Thompson, the British Council’s Lilian Somerville and art historian Norbert Lynton. Smith taught with Richard Hamilton at Gateshead in 1965, where he met Mark Lancaster and Stephen Buckley, and again in 2000, becoming close to the artist and his wife, Terry.

By the late 1960s Smith's ambition to produce paintings which shared a common sensibility with other media, such as film and photography, began to wane and he focused on the formal qualities of painting. The freestanding installation Gazebo exhibited at the Architectural League of New York in 1966, and a tent project at the Aspen Design Conference of the same year, led to the development of his renowned ‘Kite’ paintings. First exhibited in New York in 1971, the traditional wooden supports of the canvases were replaced by aluminium rods and strings, allowing them to be hung freely in response to the surrounding architecture. Smith continued in the subsequent decades to construct site-specific works in public and private spaces often hanging from the ceilings or architectural supports. He resettled in Patchogue, New York in around 1977.

“Where the first great abstract painters, including Kandinsky, Delaunay and Mondrian, derived their forms and colour harmonies essentially from nature, half a century later Richard Smith was at the forefront of a development in painting that took its cues not from the natural world but from visual stimuli already processed through culture. Smith’s joyful embrace of glamour and prismatic colour after the grey decade and a half of postwar austerity, brought him within the orbit of Pop Art at its very inception and assured him an important place in its early history.” Marco Livingstone, 2014