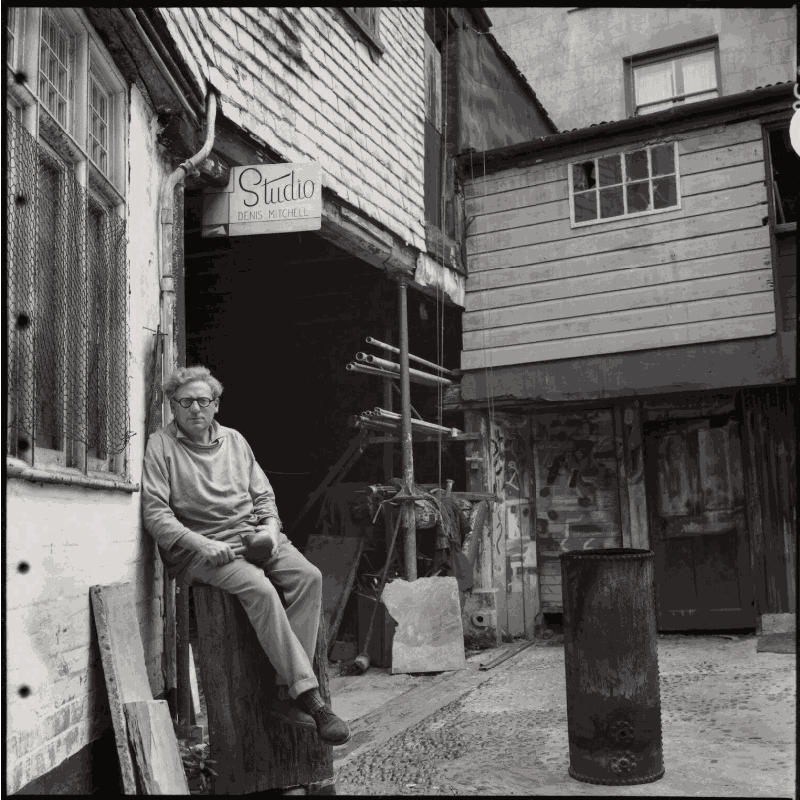 Denis Mitchell was an artist and designer.

Mitchell attended evening classes at the Swansea School of Art whilst growing up in Wales with Dylan Thomas. The artist moved to Cornwall aged eighteen and painted sporadically before the war. However, it was not until the 1950s that Mitchell would embark on the endeavour that would see him gain critical acclaim in both London and New York: sculpture. Falling in with the St. Ives community, Mitchell was introduced to Barbara Hepworth by Bernard Leach and subsequently spent ten years as her studio assistant at Trewyn. Mitchell recalled to David Lewis that ‘she had an extraordinary eye… we carved side by side… I was her hands’.

The sixties saw Mitchell gain ground internationally as a post-War sculptor. Needing more space, by the end of the decade Mitchell had moved into the large studio complex occupied by fellow sculptor John Wells at Newlyn. The decade was critical for Mitchell’s development of casting in bronze and brass, having previously only worked with direct carving techniques in wood, slate and stone.

In 2005 Tate St. Ives held a show of Mitchell’s bronzes from the 1960s and 1970s, as well as wood, stone and slate carvings from the 1970s and 1980s. The Artist’s work is now held by the Arts Council, Tate and many other public collections. Private collectors included David Bowie.