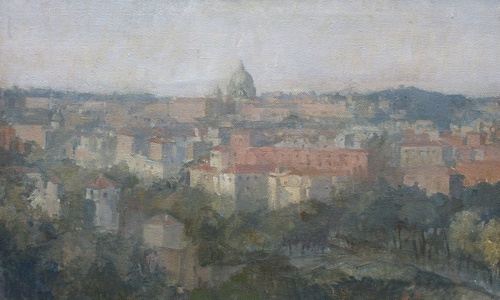 An important group of paintings by the late Royal Academician, Peter Greenham, have just been hung in the Kingsclere gallery, providing a rare chance to view his work.

On display is a curated collection of small- and medium-sized oil paintings from the artist's estate, including portraits, landscapes and images of domestic life. Greenham's work is sensitive and, like himself, without ostentatiousness or pretension leading to him long being known as a "the painter's painter".

Greenham was an influential figure in the post-War generation of British artists. He exhibited at the Royal Academy each year for forty years prior to his death and was a key figure in artistic society, having taught artsits such as Martin Yeoman and Peter Kuhfeld.

After reading English at Magdalen College, Oxford, Greenham went on the study Fine Art at the Byam Shaw School of Art. He was elected a Member of the RA in 1960 and in 1964 succeeded Sir Henry Rushbury as Keeper of the RA Schools, a position he held with distinction until his retirement in 1985.