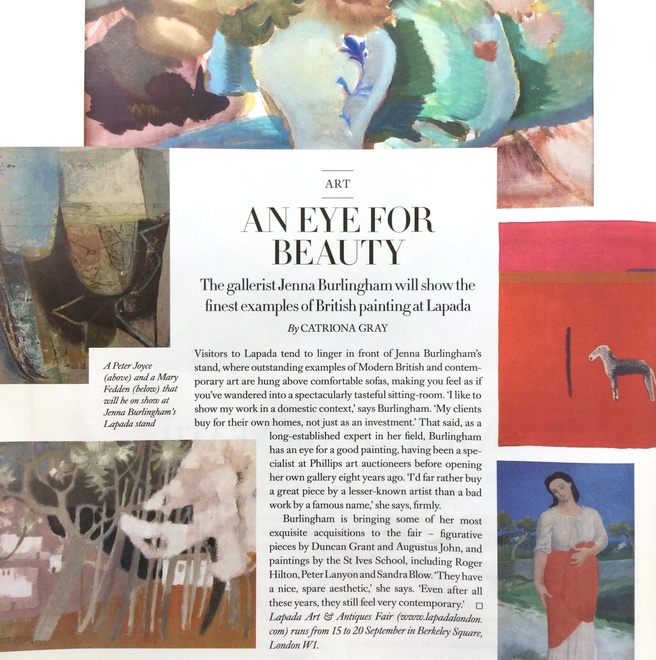 We were delighted to be featured in September's edition of Harper's Bazaar Magazine, published to coincide with the LAPADA Art and Antiques Fair in Berkeley Square, London.

The front cover of the magazine featured a painting by gallery artist, Peter Joyce. The article by Catriona Gray, writes.

"The gallerist Jenna Burlingham will show the finest examples of British painting at LAPADA. Visitors to LAPADA tend to linger in front of Jenna Burlingham's stand, where outstanding examples of Modern British and contemporary art are hung above comfortable sofas, making you feel as if you've wandered into a spectacularly tasteful sitting-room. 'I like to show my work in a domestic context,' says Burlingham. 'My clients buy for their own homes, not just as an investment.' That said, as a long-established expert in her field, Burlingham has an eye for a good painting, having been a specialist at Philips art autioneers before opening her own gallery eight years ago. 'I'd far rather buy a great piece by a lesser-known artist than a bad work by a famous name,' she says, firmly.

Burlingham is bringing some of her most exquisite acquisitions to the fair - figurative pieces by Duncan Grant and Augustus John and paintings by the St Ives School, including Roger Hilton, Peter Lanyon and Sandra Blow. 'They have a nice spare aesthetic,' she says. 'Even after all these years, they still feel very contemporary.'