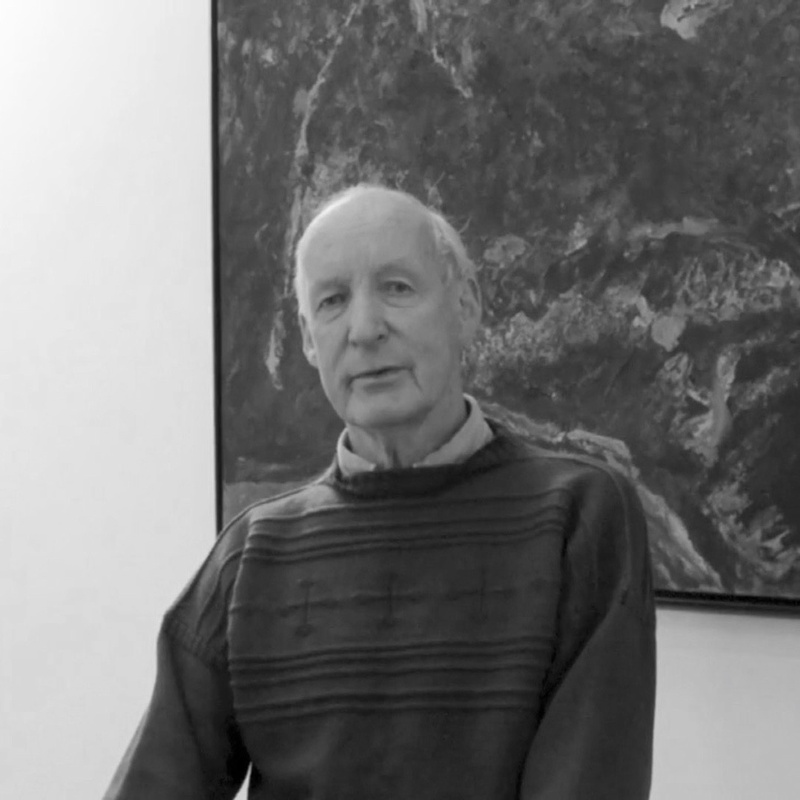 John Hubbard was an American-born abstract impressionist painter who worked in Britain.

Born in Connecticut, Hubbard was the son of a lawyer. His family spent much of their time at their small farm in the countryside. Hubbard read English at Harvard University and, after graduating, completed three years of military service in Japan during the Korean War. On his return to the USA in 1956, Hubbard studied at the Art Students League of New York and with the hugely influential Abstract Expressionist painter Hans Hoffman. Other students of Hofmann include Lee Krasner, Helen Frankenthaler, Robert De Niro Sr., the designer Ray Eames and, briefly, Jackson Pollock. After finishing his education, Hubbard then moved to Rome, spending time travelling and painting throughout Italy and wider Europe. In 1961, Hubbard married and settled near Bridport in Dorset.

The artist had first visited England in 1958 and, like many others involved in the 'Ab-Ex' movement of New York, travelled to the popular artist’s colony of St Ives, where he met the painter Peter Lanyon.  From this point on, Hubbard concentrated on a kind of landscape painting which goes beyond the depiction of appearance, alluding to natural forms and the rhythms of growing while recreating the experience of a particular place.  In Dorset, the artist’s interests in East Asian painting and philosophy and early influences such as De Kooning, Rothko and Mark Tobey were applied to his contemplation of the natural world.

From 1963 to '65 Hubbard taught at Camberwell School of Art and worked as a designer and painter for various ballet companies. His designs included the costumes and décor for 'Le Baiser de la Fee' by the Dutch National Ballet in Amsterdam in 1968, the costumes and décor for 'Midsummer' by the Royal Ballet in London in 1983, and work for 'Sylvia' by the Royal Ballet in London in 1985. As a guest artist at the National Gallery of Malaysia in 1990, Hubbard also designed a series of batik hangings, still on display in Kuala Lumpur.

Hubbard enjoyed working in series, a method for further understanding natural changes, taking his inspiration from sites he visited in Greece, Morocco, and France. From his time growing up in rural America, Hubbard had long been passionate about gardening and the subject of the garden is a recurring theme in his work, including pieces inspired by Abbotsbury, Tresco, the Alhambra, and his own mature garden in Dorset. Making sketches and charcoal drawings en plein air, Hubbard would move into the studio to create his paintings with their extraordinary sense of drama and subtle use of light and colour.

From the 1960s onwards, Hubbard increasingly showed his paintings in exhibitions in Britain and abroad. This included solo shows at New Art Centre, London (1960-'61, '63, '65, '67, '69-'75), University of Leicester (1964), St Catherine's College, Oxford (1966), Aberdeen Art Gallery, Ikon Gallery Birmingham (both 1975), Newlyn Gallery (1978), Fischer Fine Art, London (1979 and '84). With a rising interest in his work, Hubbard was the subject of a film aired as part of the South Bank Show in 1981. In 1985, his success was rewarded with a solo exhibition at the Museum of Modern Art in Oxford and, the following year, a major retrospective at the Yale Center for British Art in New Haven, Connecticut.

In 1995, he was commissioned to create an installation for the entry hall to the headquarters of Smith & Nephew in London. In 1996 he was awarded the Jerwood Prize and was invited to create work to be included in 'Eight Variations on a Drawing by Rubens' at the Fitzwilliam Museum (1998). Other commissions include Dorchester Hospital (1990), Charleston Farmhouse, Sussex (1995), Rothschild Collection, Waddesdon Manor (2000), Said Business School, Oxford (2005), and Royal Parks, London (2008). In 1993, the artist was chosen as a Member of the Advisory Panel for Tate St. Ives. In 1997, he was chosen to curate Dorset County Museum's Elisabeth Frink exhibition.

Hubbard’s work is not representational, with water or sky suggested and alluded to, yet they are far from abstract. Specialising in "contained landscape and enclosed spaces" – quarries, caves, rocks, woodland – rather than grand sweeping views, he explored the atmosphere and the spirit of places such as the play of light through leaves or the textures of stone or foliage.