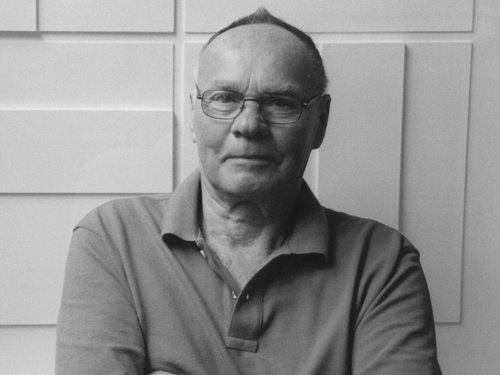 In March 1952, the unknown art student Alan Reynolds exhibited thirty-four paintings at the Redfern Gallery. A decade and nine one-man exhibitions later, his work was represented in thirty important museum collections, twelve of them overseas. He was the most significant English painter to emerge in the early 1950s.

By the mid 1950s, Reynolds was fêted by critics, sought after by collectors, both traditional and modern; and he was heralded as the saviour of English landscape painting. But from the first exhibited works to his minimalist abstractions of today there is a consistent concern for formal and structural elements of composition. From the outset, he revered the art and writing of Paul Klee; and he was later indebted to Mondrian, whose transformations of trees and branches into vertical and horizontal notations were shown at the Whitechapel Art Gallery in 1955. He also studied traditional Chinese landscape painting, and his highly praised botanical studies - ears of corn, teazles and grasses - possess an exquisite calligraphic subtlety.

Certainly, as J. P. Hodin noted, Reynolds' art of 1952 displayed:
a genuine loving attachment to nature, both to landscape as a whole and to its particular shapes and arrangements, to blossoms and fruit, to grasses and weeds, to leaves and buds, to branches and twigs . . . his preoccupation was not with the grand or with the picturesque, it was not with the topographical . . . rather a penetration into the spirit of nature

In 1953, Reynolds saw his painting as:
a problem of solving equations; tonal, linear and so on. The subject or motif must be transformed and become an organic whole. Poetry is never absent from Nature, but alone it cannot constitute a work of art. It must be reconciled with the elements of design and composition. Laying emphasis on the formal values in a work will therefore result in a degree of abstraction.

With the Four Seasons exhibition of 1956, Reynolds reached the apogee of his popularity, bringing the large satisfactions of landscapes into the galleries (Robert Melville). Here one could see a given naturalness of composition, a talent for transforming the visual into a vision, a searching formal inventiveness, an intuitive draughtsmanship, a fine brushwork' (Hodin).

His next show, in 1958 at the Leicester Galleries, saw a return to a more hard-edged approach, as if the work exhibited at the Four Seasons had taken him to far towards the representational. Melville noted that his paintings spring from needs that are not satisfied by the pleasures of the picturesque. These were the last pure landscapes that Reynolds was to exhibit.

He felt he was repeating himself and much of his output from 1958 and 1959 was destroyed, as he strove to find his pictorial language: in his 1960 exhibition, back at the Redfern Gallery, he presented non-figurative work, albeit with the same earthen colours and discernable shapes of landscape. To the many viewers who could not or would not accept Reynolds' volte-face from the Four Seasons pictures, the critic Pierre Rouve pointed out that Reynolds new works were:
. . . abstract only in the sense that, from his contemplation of nature, he has extracted the essential visual elements. These had always been present in his work: they were the universal core draped in individual topographical connotations . . . What is needed is an eye emancipated from the conventions of the picture postcard . . .

From 1960 to 1965, Reynolds' abstract paintings stood comparison with any advanced painting in Europe at the time: in a period of great experimentation, they were achieved with restraint, discipline, and a mastery of tonal gradation: an austerity is ever-present from the earliest landscape oils to the latest white on white abstract relief. To emphasise purity, and with music having always been important to Reynolds, this stage in his art saw the emergence of titles incorporating Composition, Symphony, Harmony, and Arrangement.

A decade on from his statement of 1953, Reynolds - despite a painterly journey that some artists might not achieve in a lifetime - was still expressing the same concerns:
I am obsessed with the horizontal and vertical as a structural device . . . I try to give poetic expression through this formal scaffolding, one which is disciplined and at the same time intuitive. Earlier my work was more obviously related to natural forms . . . however, if my painting has become more austere formally it is still concerned with poetry and it remains influenced by nature and my surroundings - for me it could not be otherwise.

The art of Alan Reynolds spans over five decades, and continues to develop. This exhibition explores the first fifteen years of his painting career. Since 1978, he has been represented by Annely Juda Fine Art, with whom he has held six one-man shows. His work is also regularly exhibited at galleries and museums in Germany, and in 2003, a career retrospective was held at Kettle's Yard, Cambridge.