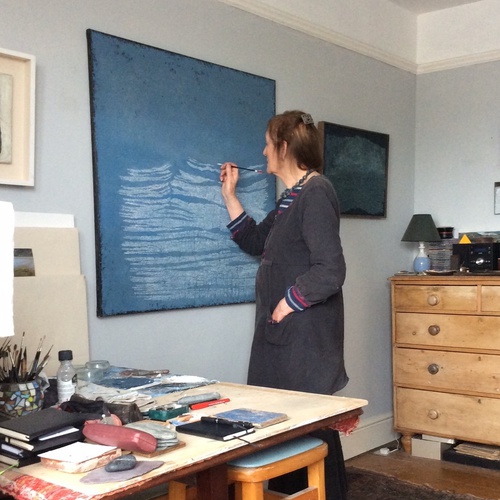 Pamela Burns is a British painter.

Burns was born in London and now lives in Pembrokeshire. She studied at the Royal Academy Schools (until 1963) and later taught at St Martins and Chelsea College of Art, London.

The technique Burns uses is engrossing and it is hard not to wonder at how these paintings are made. The marks, as if enchased, in their repeated lines, have an almost hallucinogenic quality - one is fixated by their minute scale. Some have been painstackingly created in reverse, with the background colour revealing the contrasting lines. It is a technique with its own mystery, delicately matching the mysteries of her compositions.

Burns paintings from the 1970s and '80s were inspired by the neolithic landscapes of the South West and the deep-rutted fields that lie in the shadows of the Malvern Hills, drenched in the warm greys, endlessly variant greens and deep browns of England's mud-bound cores. In particular, she looked to Maiden Castle, Dorset, and Cherhill in Wiltshire, both sites where the chalky soil had slipped to form narrow parallel ridges along the contours of the landscape.

More recently Burns paintings have recorded the changing of the tides, first in Deal, Kent and now in Pembrokeshire. Unlike most coastal painters who tend to look across the surface of the water to the far horizon, Pamela's eye is always drawn back to the shore, to the point where the land melts in to the sea. Her paintings record the changing of the tides, as the shore reclaims itself from the water, the parellel striations in the silt holding within their curved lines the imprint of the waves. The tidemarks themselves become a metonym for the process of erosion, a slow revelation of the bones of the land.

She has exhibited at the Cairn Gallery in Nailsworth (1990), a formative centre for Land Artists such as Richard Long and Hamish Fulton. The long list of other places she has show includes the Hayward Gallery and AIA, and solo exhibitions at the Barbican and Tenby Museum.