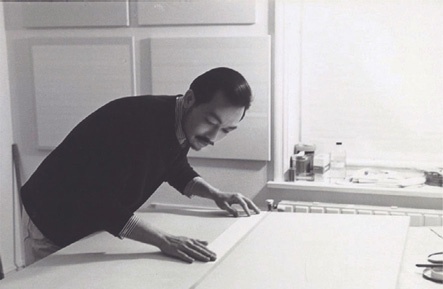 Born in Taichung, Taiwan, and brought up to be the heir to Wufeng Lin's fortune - one of the most influential families in the country, Lin was sent to the UK to be educated and to the disbelief of his family, he renounced his inheritance to become an artist. Having studied architecture at Regent St Polytechnic by day and painting by night, once he graduated in 1958 he turned to painting full-time. This experience undoubtedly influence the structured, minimalist style in which he works, as well as his predilection to work using plastic and metal. Early in his career he worked under the name Lin Show Yu, however, by 1959, and his first solo show at Gimpel Fils, London, he was exhibiting as Richard Lin. Soon his name was recognised internationally: he received an award at the 'Chinese Modern Sculpture Exhibition' organised by Taipei Fine Arts Museum and, in 1964, he was invited to participate in Documenta 3 in Kassel, Germany, becoming the first Chinese artist to take part in the prestigious exhibition. In 1967 Lin was chosen to participate in the Carnegie International in Pittsburgh, and along with Francis Bacon was awarded the William Frew Memorial Purchase Award. His wall pieces reveal a connection with the work of Donald Judd and more broadly, American minimalism, whilst his drawings and more painterly work point back to Chinese, Taiwanese ink drawings.