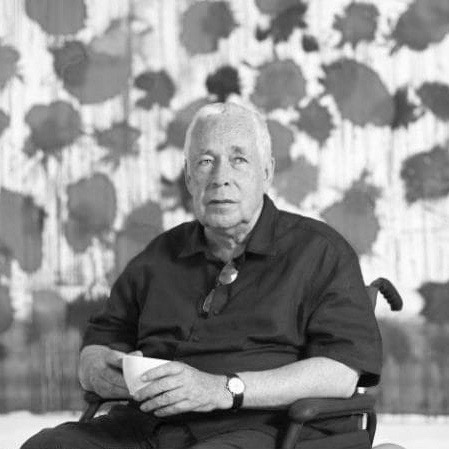 Hodgkin was born in London and grew up in Hammersmith Terrace. During World War II he was evacuated to Long Island, New York, for three years. In the Museum of Modern Art, New York, he saw works by School of Paris artists such as Henri Matisse, Édouard Vuillard, and Pierre Bonnard, which he could not easily have seen then in London or Paris. Back in England in 1943, Hodgkin ran away from Eton College and Bryanston School, convinced that education would impede his progress as an artist, though he encountered inspiring teachers at both schools. He then attended Camberwell School of Arts and Crafts (1949–50) and Bath Academy of Art, Corsham (1950–54).

Hodgkin never belonged to a school or group. While many of his contemporaries were drawn to Pop or the School of London, he remained independent, initially marking his outsider status with a series of portraits of contemporary artists and their families. His first solo exhibition was at Arthur Tooth and Sons in London in 1962. Two years later he first visited India, following his interest in Indian miniatures, which began during his time at Eton. Collecting Indian art would remain a lifelong passion, which he initially supported by dealing in picture frames.

In 1984 Hodgkin represented Britain at the Biennale di Venezia. His exhibition Forty Paintings reopened the Whitechapel Gallery, London, in 1985, and he won the Turner Prize the same year. In 1995–96 Hodgkin had an exhibition at the Metropolitan Museum of Art, New York, which travelled to the Modern Art Museum of Fort Worth, Texas; Kunstverein für die Rheinlande und Westfalen, Düsseldorf; and Hayward Gallery, London. His first full retrospective opened at the Irish Museum of Modern Art, Dublin, in 2006 and traveled to Tate Britain, London, and Museo Nacional Centro de Arte Reina Sofía, Madrid. In the autumn of 2016 Hodgkin visited India for what was to be the last time, completing six new paintings before his return to London. These works were shown at England’s Hepworth Wakefield in 2017, in Painting India, a show that focused on the artist’s long-standing relationship with the Indian subcontinent.

Starting in the 1950s, Hodgkin maintained a parallel printmaking practice, translating his visual language into works on paper. Exploring the interactions of color and space on a grander scale, he produced theatrical set designs for Ballet Rambert, the Royal Ballet, and the Mark Morris Dance Group. His black stone and white marble mural fronts the British Council’s headquarters in New Delhi. Additionally, Hodgkin designed a stamp for the Royal Mail to mark the millennium; textiles for Designers Guild; and posters and prints for the Olympic Games in Sarajevo, London, Sochi, and Rio de Janeiro.

Hodgkin was knighted in 1992 and made a Companion of Honour in 2003. He was awarded the Shakespeare Prize in Hamburg in 1997, and in 2014 won the first Swarovski Whitechapel Gallery Art Icon award.