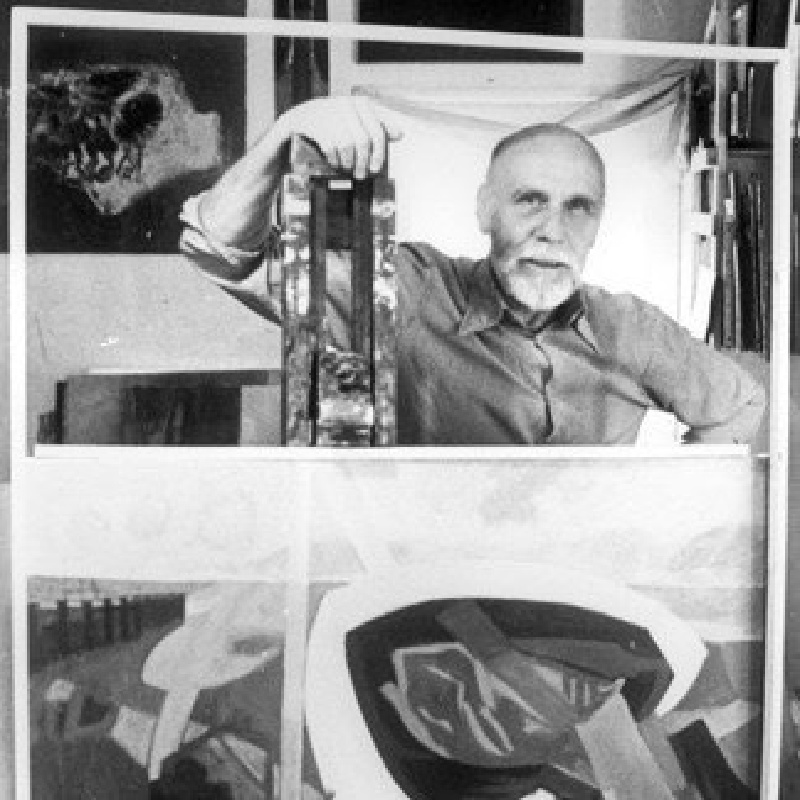 Clifford Fishwick was one of the group of talented West Country artists who extended the great tradition of English landscape painting into modern terms. He was a friend of the St Ives painters - Peter Lanyon, Paul Feiler, Trevor Bell - and he exhibited regularly with the Newlyn and Penwith Societies, but like most of that group he had come to the West Country from elsewhere.
He was brought up in Ellesmere Port and never altogether lost his northerner's accent and sly, self-deprecating sense of humour. His first one-man show in London gave him less pleasure than the banner headline under which it was reviewed in the Ellesmere Port paper: "Local Exhibitionist".

Fishwick was a painter of great technical skill and discipline which he acquired the hard way at the Liverpool School of Art. In 1942, after two years of the rigorous academic training which was then required for Certificates in Painting and Drawing, he joined the Navy and spent the next four years sailing on convoys back and forth across the Atlantic.

He returned to art school, in 1946, to complete his training and take an Art Teachers Diploma. The following year, he moved to Devon and began teaching at the Exeter College of Art where he stayed until he retired in 1984. He became Principal of the College in 1958 and steered it successfully through its student troubles in 1968 and an equally difficult period of major expansion.

All the while, despite his teaching load and heavy administrative duties, he was painting steadily and prolifically. Cezanne and Turner were his heroes. From Cezanne he derived his feeling for structure, his ability to reduce a scene to its barest elements, particularly in the series of beach scenes he painted in the 1950s in which spiky figures tend boats in interlocking, tilted planes of muted colour, representing sand and sea and sky. Later in his life, he painted big semi-abstract landscapes, all clouds and flickering light, which owe a lot to Turner. But, like Turner, he never lost the sense of place, of the specific scene behind the swirling, beautifully handled paint.

For me, however, Fishwick's greatest talent was his mastery of that peculiarly English medium, watercolour. Like Cotman, he knew how to capture a scene and an atmosphere in a few delicate strokes and a wash of pale colour. He produced, literally, thousands of watercolours, many of them works of great subtlety, but all done quickly, casually, like jottings in a notebook. He himself took this talent for granted and did not set much store by it.

His subjects were mostly mountains and moorland, the coast and the sea, but his feeling for them was not just painterly. He loved sailing and spent a great deal of time pottering along the south coast of Devon in his yacht Freya, but he loved the mountains even more. I first met Cliff Fishwick, in 1956, at Bosigran, the Climbers' Club hut on the north Cornish coast west of St Ives.

At that time, Peter Biven and his brother Barrie were putting up a series of bold and elegant routes on the granite Bosigran Cliff and Fishwick was one of their team. He never pretended to Peter Biven's extraordinary strength and rock technique, but he was the ideal man to have second on the rope - unflappable, cheerful and as solid as the rock itself. The sketches he drew of the routes for Biven's 1968 guidebook were not only wonderfully accurate, they were also little works of art in themselves, sensitive and atmospheric.

After Biven's tragic death in a climbing accident in 1977, Fishwick's interest in rock climbing faded, but not his love of the mountains and wild landscapes. Right up until his death, he was out every weekend, tramping for hours across Dartmoor, and he spent his summers in the Highlands, climbing the Monroes. He and his son Mark used to sail from Comwall up to the west coast of Scotland in Mark's historic yacht Temptress, then Cliff would be rowed ashore, usually on his own, to knock off the peaks he had chosen for that season. He had already picked out the seven he planned to climb next summer to celebrate his 74th birthday when he suffered the stroke that killed him.

He was the least commercial of artists and he had a deep mistrust of galleries. It began with his first one-man show in London: all the canvases were sold, but the gallery went bust and he never got his money. His last London show was likewise a success and a disaster: the pictures sold but the gallery- owner committed suicide soon after. Fishwick, in his modest and laconic way, decided he was a jinx and made little effort to exhibit his work. He preferred to keep his paintings to himself, as though to check up on his progress, and when he sold them he sold mostly to friends, so that he always knew where he could find them.

Cliff Fishwick was one of the few people I know who lived a good life in the way he most wanted. He and his wife Patricia, also a painter, and their four children were devoted to each other, and he managed to combine work and leisure to an extraordinary degree. He loved the hills and the sea just as much as he loved painting and he used his talent to bring these three passions together. That in itself is a great and rare achievement.