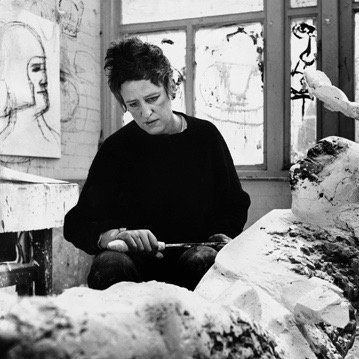 Dame Elisabeth Jean Frink was an English sculptor and printmaker.

Born in Thurlow, Suffolk, Frink studied at the Guildford School of Art (1946–1949), under Willi Soukop, and at the Chelsea School of Art (1949–1953). She became part of a post-war group of British sculptors dubbed the Geometry of Fear School that included Reg Butler, Bernard Meadows, Kenneth Armitage and Eduardo Paolozzi. Frink’s subject matter included men, birds, dogs, horses and religious motifs, but very seldom any female forms. Her sculpture, lithographs and etchings drew on archetypes of masculine strength, struggle and aggression, a truly post-war artist.

Frink spent the early part of the war in Suffolk, witnessing damaged craft returning on fire and their tangled remains crashing into the otherwise peaceful English countryside. Representing Great Britain at the 1952 Venice Biennale, Frink was described by Herbert Read as “the most vital, the most brilliant and the most promising of the whole Biennale”. In the rugged, brutal and often contorted surfaces of her work, commentators see evidence of a post-war mood that reflected the destruction, terror and brutalisation of almost six years of worldwide conflict.

Frink's first real artistic success was 'Bird' (1952; Tate, London), to be one of many avian sculptures, typical of her early work with its characteristic alert and menacing stance. Although she made many drawings and prints, she is most widely known for her monumental bronze sculptures, which have a distinctive cut and worked surface. This was created by casting from an original armature that was built up with plaster, then worked back with a chisel and surform. The process contradicts the very essence of "modelling form" established in the tradition and defined by Rodin's handling of clay.

In the 1960s and '70s, Frink’s fascination with the human form was evident in a series of falling figures and winged men. While living in France from 1967 to 1970, she began a series of threatening, monumental male heads, known as the "goggled heads." On returning to England, she focused on male nudes, barrel-chested, with mask-like features, attenuated limbs and a pitted surface, for example, 'Running Man' (1976; Pittsburgh, PA, Carnegie Mus. A.).

The 1980s held capstones for Frink's career. In 1982, a publisher proposed to produce a catalogue raisonné of her work, while the Royal Academy planned a mid-career retrospective. The date of the exhibition, originally 1986, was moved forward by a year due to demands at the gallery; this would not have been a problem lest for Frink's notoriously busy work schedule.

Then, in 1985 alone, she was committed to two major projects: a set of three figures for a corporate headquarters, one of which was a nearly seven-foot-tall male nude; and the other, a grouping entitled 'Dorset Martyrs' to be placed in Dorchester. However, despite the potential for conflict, the retrospective was a success and spurred the art world to hold more exhibitions of Frink's worth, with four solo exhibitions and several group ones coming in the following year.

Tirelessly, Frink continued to accept commissions and sculpt, as well as serve on advisory committees, meet with art students who had expressed an interest in her work and pursue other public commitments. Frink kept up this hectic pace of sculpting and exhibiting until early 1991 when an operation for cancer of the oesophagus caused an enforced break. However, a few short weeks later Frink was again sculpting and preparing for her exhibitions. In September, she underwent a second surgery. Again, Frink did not let this hold her back, proceeding with a planned trip for exhibitions to New Orleans, Louisiana, and New York City.

The exhibitions were a success, but Frink's health was clearly deteriorating. Despite this, she was working on a colossal statue, 'Risen Christ', for Liverpool Cathedral. This sculpture would prove to be her last; just one week after its installation, Frink died from cancer on 18 April 1993, aged 62. Her husband had predeceased her by only a few months.

Stephen Gardiner, Frink's official biographer, argued that this final sculpture was appropriate: "This awesome work, beautiful, clear and commanding, a vivid mirror-image of the artist's mind and spirit, created against fearful odds, was a perfect memorial for a remarkable great individual."

'Warhorse' and 'Walking Madonna' may be seen in the garden at Chatsworth House, with other work at the Jerwood Sculpture Park, Ragley Hall. Uniquely in England, 'Desert Quartet' (1990), Frink's penultimate sculpture, was given Grade II* listing in 2007, less than 30 years from its creation by the Department for Culture, Media and Sport. It may be seen opposite Liverpool Gardens in Worthing.

Before Elisabeth Frink died in 1993, she had given classes at the Sir Henry Doulton School of Sculpture then headed by sculptor Colin Melbourne ARA in Stoke on Trent, England. Rosemary Barnett took over as principal of the Sir Henry Doulton School of Sculpture, Stoke-on-Trent, briefly before its closure. In 1990 she met Harry Everington there and their shared artistic outlook brought about the Frink School of Figurative Sculpture. Permission from the Frink Estate was given because it was to continue the tradition which she represented. The School opened in 1996 and it attempted to give some balance to the declining figurative training and increased conceptualism in sculpture schools in the UK. David Bowie owned a number of her works.

“Sculpture is a separate thing; it does not require a wall like a picture. It does not even need a roof. It is an object that exists for itself – alone, and it is well to give it entirely the character of a complete thing about which one could walk, and which one could look at from all sides. Yet it had to distinguish itself somehow from other objects, the ordinary things that anyone could touch, handle or use. It has to become unimpeachable, sacrosanct, separated from chance and time through which it rises, isolated and miraculous, like the face of a seer. It has to be given its own certain place, where no arbitrary decision placed it, and it must be intercalated in the silent continuance of space and it’s great laws. It had to be placed into the space that surrounded it, as into a niche; it’s certainty, steadiness and gravity does not spring from its significance alone but from it’s harmonious adjustment to its environment”, (Rilke in his monograph on Rodin 1903).