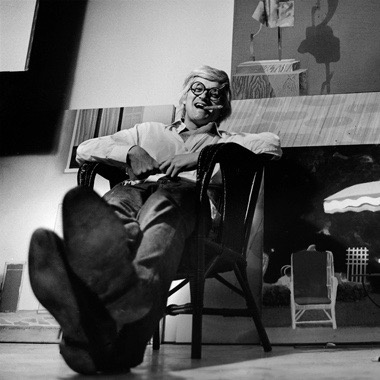 Perhaps the most popular and versatile British artist of the 20th century, Hockney made apparent his ability as a draughtsman while studying at Bradford School of Art between 1953 and 1957.

Hockney soon sought ways of reintegrating a personal subject-matter into his art. He began tentatively by copying fragments of poems on to his paintings, encouraging a close scrutiny of the surface and creating a specific identity for the painted marks through the alliance of word and image. These cryptic messages soon gave way to open declarations in a series of paintings produced in 1960-61 on the theme of homosexual love.

Hockney's subsequent development was a continuation of his student work, although a significant change in his approach occurred after his move to California at the end of 1963. It is clear that when he moved to that city it was, at least in part, in search of the fantasy that he had formed of a sensual and uninhibited life of athletic young men, swimming pools, palm trees and perpetual sunshine.

On his arrival in California, Hockney changed from oil to acrylic paints, applying them as a smooth surface of flat and brilliant colour that helped to emphasise the pre-eminence of the image. By the end of the decade, Hockney's anxieties about appearing modern had abated to the extent that he was able to pare away the devices and to allow his naturalistic rendering of the world to speak for itself.

In 2020 a retrospective of Hockney's work from the 1950s to the present day was held by The Lightbox, Woking, and 'Drawing From Life' was held at the National Portrait Gallery. Also in 2020, Hockney was invited to design a cover for British Vogue featuring the landscape of the UK. The original prints were then auctioned off in aid of Covid-19 relief charities. A celebration of Taschen's 40th anniversary was marked with a new chronology of David Hockney, available here.

He lives between Yorkshire and Normandy, spending the recent lockdown at his French home (Will Gompertz, BBC).

Hockney's works are held in public and private collections worldwide, including UBS and Deutsche Bank. Taschen published a