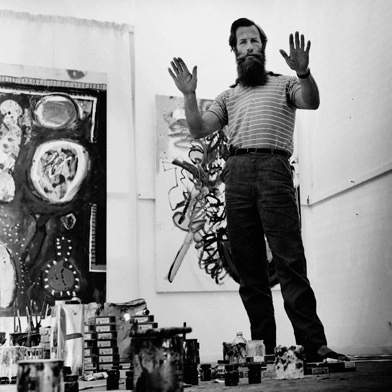 Alan Davie is one of Scotland's most internationally recognised artists with works in public collections across the world.

As a young man, he developed a love of the arts, wrote poetry and played saxophone in a jazz band. He studied at Edinburgh College of Art from 1938-40. In 1945 Davie was deeply impressed by two exhibitions: Picasso at the V&A and Klee at the Tate, and not long after he visited the Peggy Guggenheim Collection in Venice, where he came across the paintings of Jackson Pollock. These American Abstract Expressionists inspired Davie, alongside Surrealism and the Cobra group. Using these, he developed his own unique form of expression combining mythic imagery, enigmatic symbols and later taking inspiration from African and Oceanic art as well as Zen Buddhism.

In 1956 Davie made his first trip to the United States, where he was the subject of a solo exhibition at the Catherine Viviano Gallery where work sold to Deutsche Bank and Davie was introduced to Robert Motherwell, Jackson Pollock, Franz Kline, Mark Rothko, and Willem de Kooning. The Scottish National Gallery of Modern Art held a retrospective exhibition in 2000, which was followed by a survey the following year at the Cobra Museum of Modern Art in the Netherlands. In 2003-2004, the Tate St. Ives exhibition Jingling Space celebrated Davie's significant contribution to painting. David Bowie was known to be an admirer.