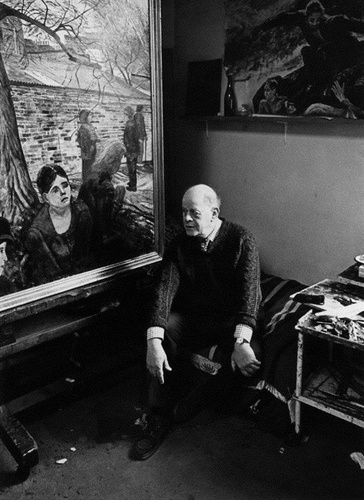 Carel Weight was born in Paddington, West London in 1908. His mother, who was of German and Swedish descent, was a chiropodist, and his father was a cashier at a bank. As they both worked, his parents placed Weight with a foster mother, Rose Matkin, who was also his godmother and who lived in Fulham, then a working-class district. He spent his weeks with her and his weekends in his parents' more middle-class household, acutely aware of the contrast between deprivation and affluence. From an early age, he was sensitive to the unexpected - the shock of burning buildings or a bus mounting the pavement - and these events remained with him to infuse his paintings.

Weight studied at the local Hammersmith School of Art (1928-30), where he met Ruskin Spear, who became a lifelong friend. With the encouragement of James Bateman, Weight moved to Goldsmiths' College (1931-3), where the teaching allowed scope for imaginative composition. This was Weight's preferred mode.

Teaching at Beckenham School of Art (1932-9) enabled him to support himself. He exhibited at the Royal Academy and the Royal Society of British Artists and was a committee member of the Artists International Association, which helped artists fleeing Nazi Europe. After being called up to the Royal Engineers, he taught with the Army Education Corps (1944-5) before being sent to Italy as an official War Artist (1945-6). While encountering friends from Goldsmiths' and fellow War Artists like Eric Ravilious and Edward Bawden, Weight had a free hand in choosing his topographical subjects. He also travelled to Vienna and to Greece, and would describe this formative experience as a 'scholarship from the army'.

On his return to London in 1947, Weight was invited to teach at the Royal College of Art, where he participated in the revival of its fortunes. He executed a mural for the Country Pavilion of the Festival of Britain (1951). He painted landscapes and portraits, but much of his work captured a mood of melancholia, evident in the mysterious presences in his ghost paintings set in the unassuming urban settings of the west and south of London most familiar to the artist. He became Professor of Painting at the Royal College of Art in 1957 and was awarded the CBE in 1962. In the following year he painted the mural Christ and the People for Manchester Cathedral, and in 1965 was elected RA, being celebrated with a one-man exhibition at the Academy in 1982. After his retirement from the RCA in 1973, his work remained thematically complex while developing new techniques. He served in a number of honorary and official capacities including being President of the Stanley Spencer Society; he was appointed a Companion of Honour in 1995. David Bowie was a private collector of his work.