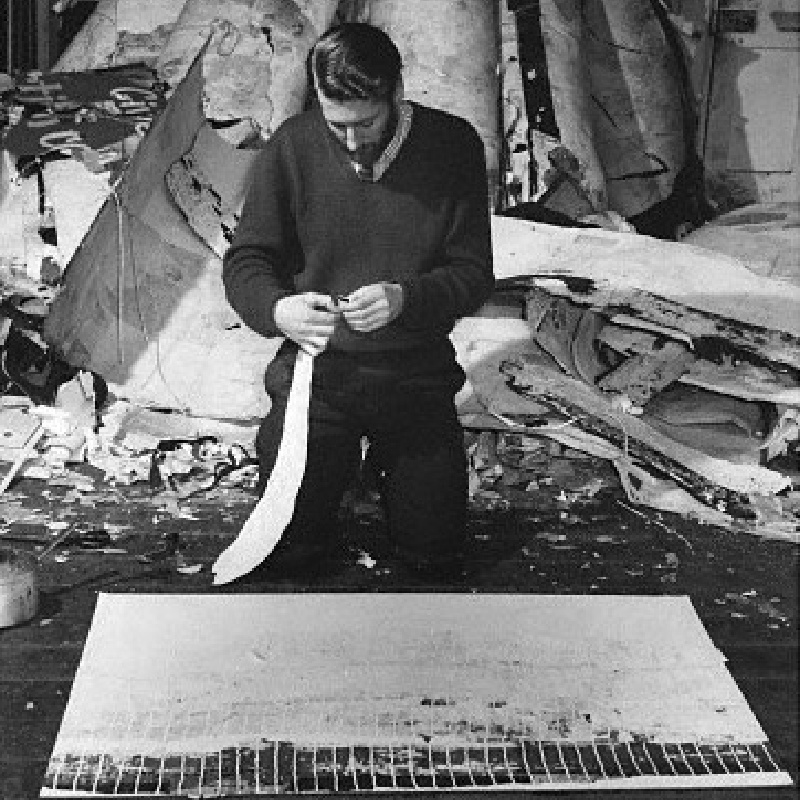 (David) Gwyther (Broome) Irwin was a British abstract artist known for his collages.

Irwin was born in Basingstoke, Hampshire, but grew up at Foredore House in Trebetherick, on the north coast of Cornwall. He was educated at Bryanston School in Dorset, where Roger Hilton was his art master. The artist chose to continue his studies in London, moving to Bloomsbury and studying at Goldsmith's Art School (1951-52) and the Central School of Art, Holborn (1952-55). During the '50s Irwin was experimenting with European avant-garde styles such as art brut, graffiti, and the use of found images. This all fed into a style which is all his own, a form of 'three-dimensional collage', half-way between painting and sculpture.

It was in 1957 that his work first came to prominence, with a solo exhibition at Gallery One, his inclusion in the celebrated exhibition 'Metavisual, Tachiste, Abstract' at the Redfern Gallery, as well as exhibiting at the AIA Gallery, Rome New York Art Foundation and 'Dimensions' at the O'Hana Gallery. He showed in Australia, Paris and New York. His first solo exhibition with Gimpel Fils in 1959 was critically acclaimed. The artist was part of the 'Situation' group in 1961 when Sylvia Sleigh painted a portrait of its members, the work now forming part of the National Portrait Gallery Collection. The following year, his work was critically praised in the Burlington Magazine by Anita Brookner: 'so masterly that one predicts for him a place among the foremost contemporary British artists.'

In 1960, Irwin married Elizabeth Gowlett, with whom he would have two sons and a daughter. In the 1960s the artist taught at schools in Hornsey, Corsham, and Chelsea before taking on the role of Head of Fine Art at the Brighton School of Art in 1969, a position he held until 1984. His first international exhibition was at the Paris Biennale in 1960. Then, for the 32nd Venice Biennale (1964), Irwin was chosen to represent Britain, at a pavilion which included pieces by Joe Tilson, Bernard Meadows, and his former teacher Roger Hilton.

The artist's prominence suffered, as with so many accomplished artists in the 60s, from the sudden focus on Pop Art. A retrospective in 1987 and Irwin's inclusion in two major surveys, at the Barbican (1993) and Tate Britain (2004), were tempered by the onset of Alzheimer's disease and his inability to paint in 1996.

Irwin's most celebrated and innovative artworks were created from newsprint and paper advertisements, which the artist collected from the streets with his wife before working them into fine collages of delicate and subtle shades. With his rising success, the paper detritus began to be delivered by the bale to his studio in Bushey, Hertfordshire. In some of his later works, the artist also used string, wood shavings, chalk, and other found objects.

"Gwyther Irwin's latest collages ... are evidently miracles of patient assembly ... they set out to achieve the subtlest and slowest possible shifts in tonality from umber darkness to creamy light and back again. The patience, the subtlety, the muted gradations of every effect combine to produce an atmosphere of studied beauty." ('The Times', 18 September 1959)

Irwin's works are included in notable collections such as the Guggenheim, Venice, British Council, Arts Council, Deutsche Bank, British Government, Southbank Centre, Portsmouth Museum, Sheffield Museum, and the Tate. His work has been part of 'The Art of Assemblage' exhibition at the Museum of Modern Art, New York, and 'Collage, Montage, Assemblage' at the Tate.

"I write the pictures. Starting at the top left-hand corner I work along, adding individual ribbon-like unit to individual unit until I reach the right-hand edge. I then return to the left-hand edge and repeat the process until the bottom right-hand corner is reached, some 400 hours after beginning ... I watch with wonder and excitement as the colours and marks, falling from my hand as if propelled by a source of guidance other than myself, slowly spread across the surface." ("Gwyther Irwin", in 'Contemporary British Artists Directory', 1979)