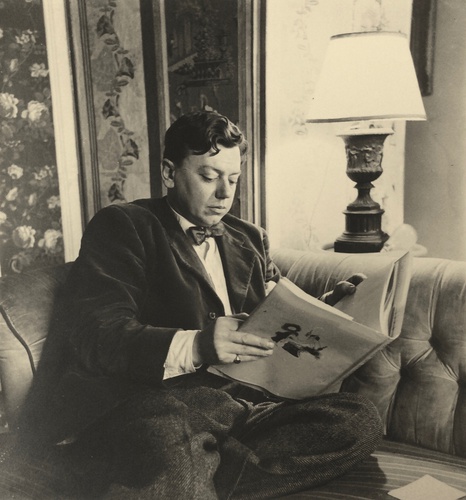 Laurence Scarfe was a multi-disciplinary Modern British artist who worked in London.

Scarfe was born in Idle, Yorkshire, and attended the Shipley School of Art before moving to London to study painting at the Royal College of Art (1933-37).

He carried out mural work for the British Pavilion at the 1937 Exposition Internationale des Arts et Techniques dans la Vie Moderne in Paris, the Books & Printing section at Britain Can Make It (1946) and the British Industries Fair (1948). Of major importance were his murals for the Dome of Discovery and the Regatta Restaurant at the Festival of Britain’s South Bank site (1951). Other murals included those for the P&O liners Orcades and Oriana in the '50s.

Though he found success as a commercial artist, Scarfe enjoyed teaching and lectured part-time for many years, including at the Bromley School of Art (1937-39), Central School of Art (1945-70) and Brighton Polytechnic, where he taught the History of Illustration and Graphic Design before retiring from teaching in 1980.

Scarfe travelled extensively throughout Europe from 1947 to '69, most enjoying Italy, Sicily and Malta, and European thinking heavily influenced his ideas on painting theory. He was a member of the Society of Mural Painters and a Fellow of the Society of Industrial Artist and Designers. The majority of the artist's papers from the focal years of his career, 1935 to '83, are held in the V&A Archive of Art & Design.

Scarfe's work represents a range of personal influences, through periods of design and theoretically-focused work before the Second World War, through the optimism and growth of the Festival of Britain period and the abstract movements of the seventies. In his later years, Scarfe began to create more pictorial and pastoral work.