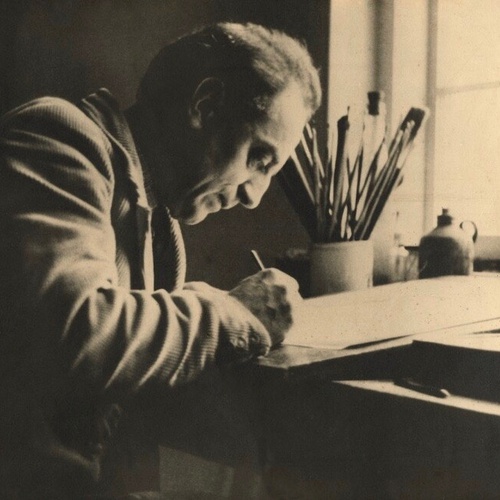 John Nash was a landscape and still life painter in oil and watercolour, a wood engraver and illustrator.

He was born in London in 1893. After some encouragement from his brother, Nash turned to watercolour landscapes and comic drawings having first worked as a journalist for a local newspaper. In 1913 he and his brother exhibited together at the Dorien Leigh Galleries, and his first solo exhibition was held at the Goupil Gallery in 1921. In 1913 he became a member of the Friday Club, of the London Group in 1914, the Cumberland Market in 1915, the N.E.A.C. and the Society for Wood Engravers in 1921 and the Modern English Water-Colour Society in 1923. He became an Associate member of the Royal academy in 1940, and a Member in 1951. He had begun to paint in oils in 1914, before serving with the Artists' Rifles during the First World War. In 1918 he was the Official War Artist. After the war he moved to Gerrards Cross where he lived until 1921. Whilst living here he became first art critic on the London Mercury. In 1922 he moved to Princes Risborough to teach at the Oxford Ruskin School where he remained until 1927. Nash then taught at the R.C.A. from 1934 to 1940, and again in 1945 until 1957. In 1937 he executed a large mural for the Paris Exhibition. During the Second World War he served in the Observer Corps, before becoming Official War Artist to the Admiralty in 1940. in 1944 he was demobilized and moved to Colchester, Essex, to live. During this time he exhibited with the Redfern Gallery. A retrospective exhibition of Nash's work was held in 1954 at the Leicester Galleries.