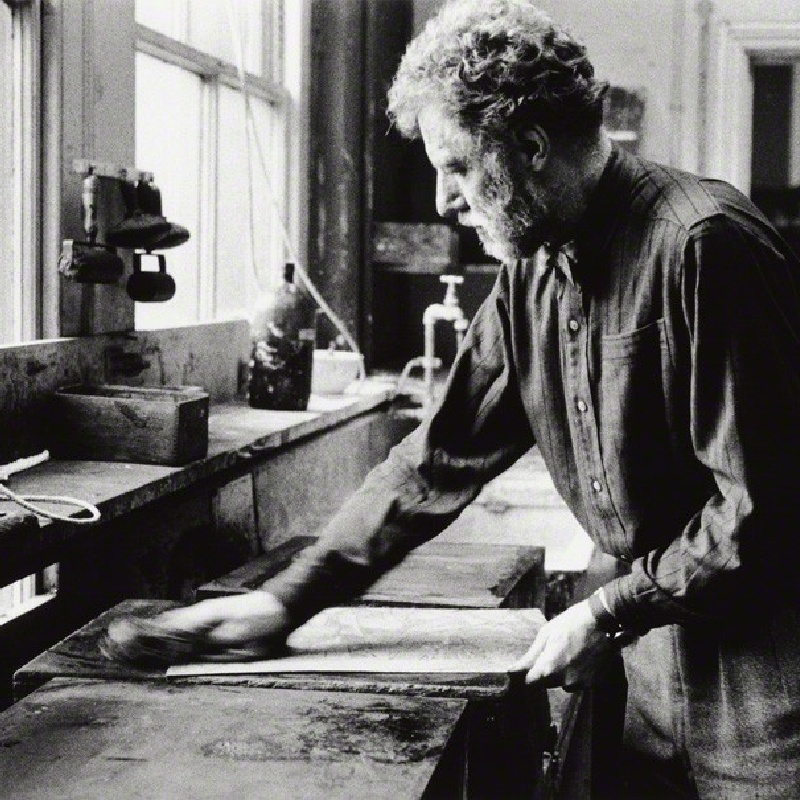 Julian Trevelyan, Photograph of the Artist in his printing studio
View works
Share

Julian Trevelyan was an important British artist in the twentieth century.

Trevelyan was educated at Bedales School and Trinity College, Cambridge, where he read English Literature. He moved to Paris to become an artist and enrolled at Atelier Dix-Sept, Stanley William Hayter's engraving school, where he learned about etching. He worked alongside artists including Max Ernst, Oskar Kokoschka, Joan Miró and Pablo Picasso.

In 1935, Trevelyan bought Durham Wharf, a group of warehouses beside the River Thames in Hammersmith, London. The place became his home and studio for the rest of his life as well as a source of endless artistic inspiration. He became a confirmed Surrealist and exhibited at the International Surrealist Exhibition, which was held at the New Burlington Galleries in London.

Trevelyan married Ursula Darwin, daughter of Bernard Darwin and great-granddaughter of Charles Darwin, but their marriage was dissolved in 1950. Their son is the film-maker Philip Trevelyan. It was in 1951 that he married the woman who became his most renowned collaborator and muse, Mary Fedden.

From 1950 to 1955, Trevelyan taught history of art and etching at the Chelsea School of Art. Between 1955 and 1963 he was tutor of engraving at the Royal College of Art, before rising to Head of the etchings department and becoming influential to many younger printmakers, including David Hockney and Norman Ackroyd.

In July 1986, Trevelyan was awarded a senior fellowship at the Royal College of Art and in September 1987 he was appointed a Royal Academician.

A Trevelyan retrospective, The Artist and His World, was held at Pallant House Gallery, Chichester in 2018.

His son has written a monograph on Trevelyan, 'Picture Language', published in 2013 by Lund Humphries.