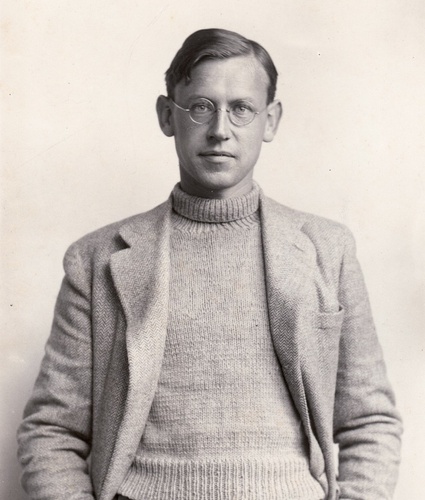 Richard Eurich was a painter and draughtsman who took as his principal theme the sea, ships, ports and beach life.

Born in Bradford, Yorkshire, Eurich’s skill in painting was nurtured early on at Bradford Grammar School before being accepted to study at Bradford School of Art (1920-24). His first solo show was in 1929 at the Goupil Gallery, London, and was followed by annual exhibitions at the Redfern Gallery throughout the 1930s and ‘40s. Here he exhibted mostly paintings of coastal towns he had visited along the South, including Newlyn, West Bay and Lyme Regis.

Eurich was appointed as an Official War Artist for the Admiralty throughout much of the Second World War, during which time he painted Survivors from a Torpedoed Ship, now in the Tate Collection. After the war, Eurich took a teaching post at the Camberwell School of Arts and Crafts before settling for many years at Dibden Purlieu, near Southampton. He was elected a Member of the Royal Academy in 1953 and exhibited there for much of his life.

Eurich's work generally depicted everyday events, though with an element of decidedly English oddness, as in his picture The Mummers, in Hove Museum of Art. His work was included in exhibitions at Tooth and Sons (1968-74), Fine Arts Society (1977, '83 and '91) and Agnews (1985 and '88). An important retrospective exhibition of Eurich's work was held at Bradford Art Gallery and Museum (1979-80), which later toured the UK.

After his death, a memorial exhibition entitled 'Visionary Art' was presented at Southampton City Art Gallery in 1994, which also toured nationally. In 2003, the centenary of Eurich's birth was commemorated with another touring exhibition, organised by Helen Robinson of Bruton Gallery, that brought his paintings to Eurich's native Yorkshire, including the Wakefield Art Gallery. In the same year, there were also exhibitions at the Millais Gallery, Southampton Institute, Southampton Art Gallery, and Fine Art Society. Many institutions hold work by Eurich, both public and private, including The Imperial War Museum, National Maritime Museum, Greenwich. Lund Humphries is due to publish a monograph on the artist in 2020.