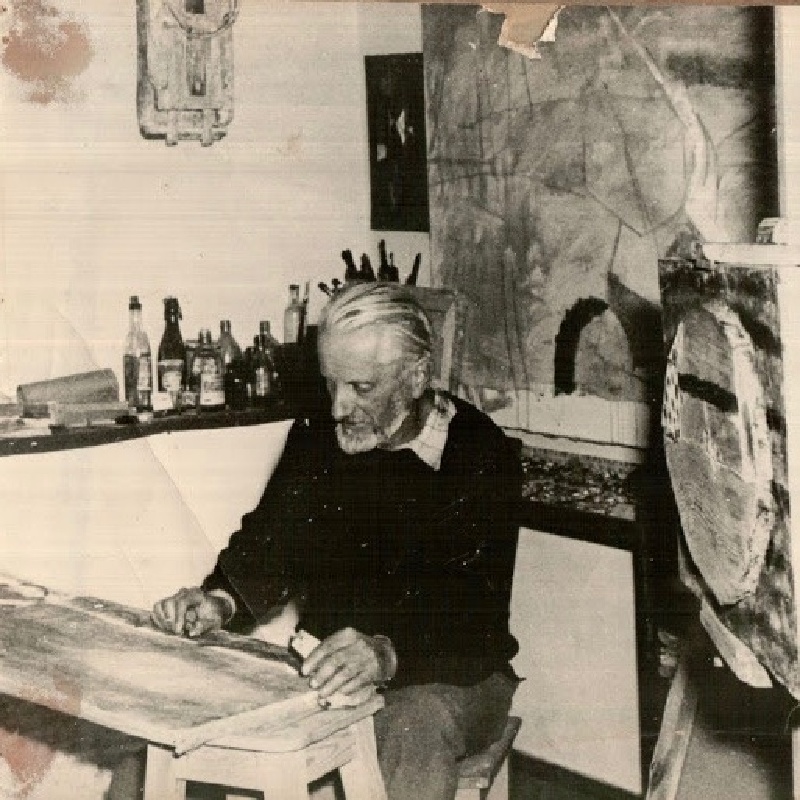 Tadeusz Piotr (Peter) Potworowski was a Polish painter known for his work in Britain and France.

Potworowski was born in Warsaw to Gustaw Seweryn, an engineer, and his wife Jadwiga (née Wyganowska). His mother died in an accident when he was 15, so Peter and his two younger brothers were sent to live with family outside the city. After serving in the First World War, Potworowski enrolled at the Warsaw University of Technology to study architecture, though his studies were halted by the Bolshevik campaign.

After the end of the Polish-Soviet War in 1921, Potworowski returned to Warsaw and began to study art at the school of Konrad Krzyżanowski. By the following year, he had taken a place at the Academy of Fine Arts in Krakow, where he studied under Józef Pankiewicz. It was Pankiewicz who incorporated Potworowski into the Paris Commute, or Kapists, a group of Polish artists who travelled to the French capital in 1924.

There, Potworowski rented a separate studio to the rest of the group, in Montparnasse, and enrolled in Fernand Leger's studio. It was through this job that he met his first wife Magdalena Mańkowska, a student of anthropology in Paris. After marrying in France, and visiting Britain in 1928, the couple returned to Poland in 1930, where their first son John was born.

In 1931, Warsaw was the locale of the first Kapists exhibition, entitled New Generation, which took place at the Artist's Club, Hotel Polonia, and the Institute of Art Propaganda. Here, Potworowski received a prize for his painting Three Women in the Interior. The following year, he held his first solo exhibition at the Makowski Salon in Poznań. This success was sustained through 1937 when the artist received a silver medal at the International Exhibition of Art and Technology in Paris, as well as the award from the Minister of Foreign Affairs. After this strong development, Potworowski had a travelling solo exhibition arranged, held in 1938 at the Institute of Propaganda of Art in Warsaw and then in Lviv.

Following the invasion of Poland in 1939, Potworowski escaped to Sweden via Lithuania. It was from here that the artist, with his wife and two young children, made his way to Britain, arriving in 1943. After serving in Scotland, Potworowski settled in London and found success with his art. In January 1946, an exhibition of 33 of his works was held at the Redfern Gallery. This was followed by regular exhibitions with the Redfern, Gimpel Fils (48 onwards) and The London Group, to which he was elected a member in 1949.  In London, he was also the president of the Association of Polish Artists and published regularly in the monthly magazine "Nowa Polska".

Potworowski's teaching career included eight years as Professor of Painting at the Bath Academy of Art, Corsham (1949-57), where he had considerable influence and came into contact with Lanyon, Wynter, Frost, Heath and others that were teaching there. He enjoyed spending time in the countryside of Bath and Somerset, finding Wookey Hole a particularly fascinating site. Making his way to Cornwall, Potworowski took a studio at Sancreed near Penzance. The landscape here invigorated his work and he painted extensively in the Duchy. In 1956, Potworowski was elected to the Royal West of England Academy and in 1960 he won an award at the Venice Biennale.

In the relative peace of the 1950s, Potworowski travelled and painted extensively with his professional and romantic partner Doreen Heaton Potworowska, whom he met in 1952 while teaching at Corsham. They visited much of Europe including in France, Spain and Italy,before returning to his native Poland in 1958, where the artist spent the last four years of his life. Doreen stayed in Poland for a few years before returning to England.

Peter Potworowski's work is held extensively in notable private and public collections internationally, including the Victoria Art Gallery, Royal West of England Academy and the Tate.