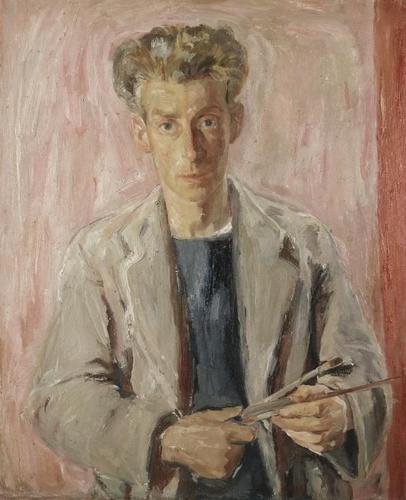 William George Gillies was born in Haddington on 21 September 1898, the son of the High Street tobacconist John Gillies. He grew up in the town and from an early age began to paint the streets and closes of Haddington under the supervision of his art-teacher uncle, William Ryle Smith. They also took trips to Edinburgh to paint, and so the young William Gillies was exposed to the collections of the National Galleries of Scotland and the Royal Scottish Academy’s annual exhibition of new Scottish work.

He attended the Knox Institute (now Knox Academy) alongside his good friend Norman W. Porteous, who would later become Principle of New College, Edinburgh University. He was encouraged to become a painter by the then editor of The Haddington Courier – R.A. Dakers, who was an amateur painter himself. Dakers taught Gillies the techniques involved in oil painting, and soon he had his first exhibition in the shop window of a watchmaker – Alexander Wright – on the High Street.

In 1916, aged 18, Gillies was accepted as a student at Edinburgh College of Art (ECA). However, his studies were cut short in the spring of 1917 when he was called up to serve in World War I. Although wounded twice, he returned safely to Scotland in 1919 and resumed his studies at ECA that year. In 1922 he founded the 1922 Group with fellow students and they began to exhibit around Edinburgh. After graduating he was awarded a scholarship to travel overseas. He went with fellow student William Geissler to Paris where they attended the academy of André Lhote – a member of the Cubist School. In 1924 he travelled on to Italy before returning to Scotland.

In 1925 he started teaching Art at Inverness Academy before moving back to Edinburgh to take up a teaching post at his former College of Art. Here he would continue to teach for the next 40 years and become principal before retiring in 1966. Throughout this time he continued to produce celebrated and highly influential work of his own.

In 1970 Gillies was awarded a large retrospective exhibition at the Royal Scottish Academy; he also received a knighthood for his services to Scottish art and was elected Academician of the Royal Academy.

Sir William George Gillies died on 15 April 1973 in his cottage at Temple, Midlothian.

Thanks to Haddington’s History Society, a commemorative plaque at 6 High Street now marks the place of his birth.