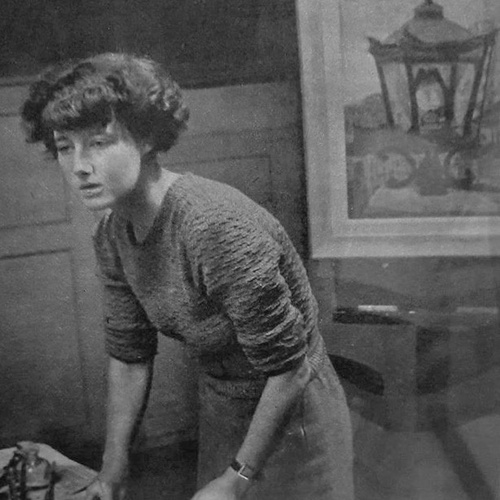 Prunella Clough was an English painter, draughtsman and printmaker.

Born on November 11 in Knightsbridge. In 1937 Clough enrolled at Chelsea School of Art, now Chelsea College of Arts, where she took classes with the sculptor Henry Moore in the following year. Her studies were interrupted by the Second World War, in which she worked as an engineer's draughtsman and cartographer from 1940.

After returning to painting after '45, Clough chose the pertinent subjects of post-war labour and the urban landscape, the main body of her first solo exhibition at the Leger Gallery, London in 1947. These early works are definitive though fewer in number as she found her place in the British art world painting workmen, dockers and fishermen in London, East Anglia - her mother had a home in Southwold - and the Midlands industrial areas until the early 1950s.

Alongside abstraction taking hold in British art in the 1950s, Clough began focus further on the formal qualities of her subjects with her images becoming far less restrained. A solo exhibition at the Whitechapel in 1960 traced this journey and she enjoyed further retrospectives at the Serpentine in 1976 and Camden Art Centre in 1996. Shortly before her death in 1999 she was awarded the Jerwood Painting Prize and, with characteristic generosity, donated her prize towards supporting younger artists.