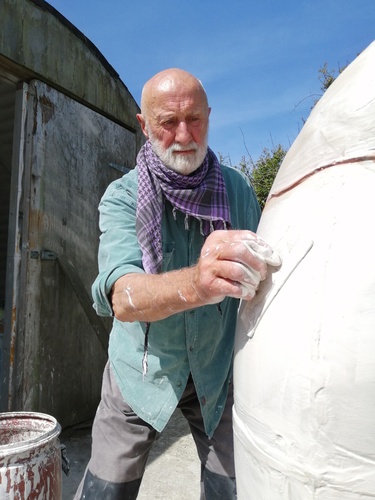 "My aim is to create ceramic sculptures which have a powerful presence, expressing the essence of beauty found in ancient and modern forms."

Tony Lattimer is an artist making sculptural ceramics who lives and works in UK. His medium is high-fired stoneware with slip glazes.

His work has been exhibited at a range of national and international galleries and institutions, including: Tate St Ives, UK; International Museum of Ceramic Art, Faenza, Italy; Roche Court Sculpture Park, UK, and is also held in various private collections.

Tony says, ‘Thrown pots are a spiral growing on the wheel. The inside emotional hand expands the form and the outside hand tempers the form using the judgement of the head.

‘I wanted to free the growth and expansion from the constraints of the wheel and create forms developing up and out like a jazz riff.

‘The Japanese do this in their tea bowls, introducing asymmetry by slow wheels thus having time to follow the curve out of true without collapse.

‘My work is made initially very slowly by building with coils. Lately I have then captured these emerging forms by making moulds and then using slab sheets of clay to rebuild them.

‘Although loving Korean Moon Jars and Han Dynasty masterpieces, I can see no point in making versions of these examples. Somehow I know that the forms of life are always generous and expansive and have the freedom of energy released so I try to capture this by pushing the processes to the edge like blowing up a balloon to the point of bursting, but not quite, and painting or making marks with grand gestures on the edge of risk.

‘I risk survival in the capacity of the clay not to collapse and the glazes to cling on to the form. I have many failures but those that survive…!’