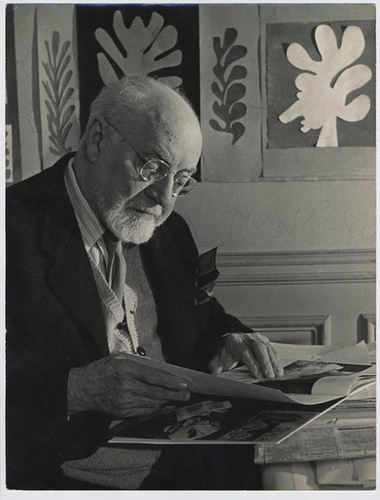 Henri Matisse was a French artist, known for his painting, printmaking and sculpture.

Born in Le Cateau-Cambrésis, northern France, to a wealthy merchant family, Matisse studied law in Paris and began working as a court administrator. In 1889, he was gifted art materials whilst he was recovering from appendicitis, after which Matisse decided to become an artist. Training from 1891 at the Académie Julian under William-Adolphe Bouguereau and later at the École Nationale des Beaux-Arts with Gustave Moreau (1826-1898), Matisse mostly produced still life and landscape paintings in a more traditional style than that for which he is most known.

From 1896 Matisse's style underwent a transformation; the naturalistic tones that had been prominent in his prior work were eschewed in favour of bright colours. This change may be due to his study of the Impressionistic style, though he was gifted a Vincent van Gogh portrait by the artist John Russell (1858-1930). Later, other influences began to show in his work, including a painting he had acquired, Cézanne's 'Three Bathers', a work that he admired greatly, stating 'it has sustained me morally in the critical moments of my venture as an artist; I have drawn from it my faith and my perseverance'.

Between 1904 and 1908, Matisse began working with, and was considered a leader of, the Fauvist movement, alongside fellow founder André Derain and artists Georges Braque, Raoul Dufy and Maurice de Vlaminck. During this period, Matisse met Pablo Picasso (1881-1973)at the Paris salon of Gertrude Stein, and the two became lifelong friends. Works Matisse produced during this period include 'Woman with a Hat' (date, where it is now), which was bought by Gertrude and Leo Stein.

Some of Matisse's best regarded work was produced following the decline of the Fauvist movement, taking on an active role in the artistic community in Montparnasse and travelling widely in order to study art of other cultures, including that of Algeria, Spain and Morocco. After 1917, Matisse relocated to Cimiez, a suburb of Nice, where his orientalist inspirations, partially drawn from his trips to Morocco, are characteristic of the work produced at this time.

Matisse's work post-1930 is noted for its bold simplification, particularly in contrast to the orientalist subject matter of his earlier work. Matisse remained in Nice throughout the Nazi occupation of France (1940-1944), and continued to work, notably producing graphic black-and-white illustrations for books, including lithographs with the Mourtlot Studios. In 1941, Matisse underwent treatment for abdominal cancer which limited his mobility, circumstances which inspired him to further experiment with the medium of cut-outs, as painting and sculpting became too difficult.

Matisse died in November 1954. His work is represented by many prominent collections worldwide including that of the Tate, Hermitage Museum and Museum of Modern Art. In 2014, Tate Modern held 'Henri Matisse: The Cut-Outs', the first show in the gallery's history to attract more than half a million visitors.