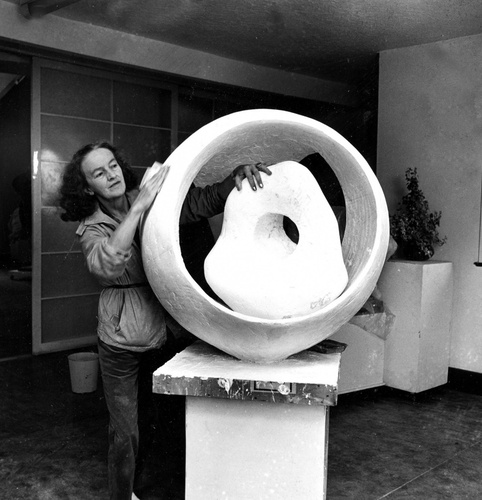 Barbara Hepworth was one of the greatest artists of the twentieth century.

Born in Wakefield in 1903. She trained in sculpture at Leeds School of Art between 1920 and 1921, and, on a county scholarship, at the Royal College of Art from 1921 to 1924, meeting the painters Raymond Coxon and Edna Ginesi and the sculptor Henry Moore. Hepworth was runner-up to John Skeaping for the 1924 Prix de Rome, but travelled to Florence on a West Riding Travel Scholarship. After visiting Rome and Siena with Skeaping, they were married in Florence on 13 May 1925 and moved to Rome, where both began carving stone. In November 1926, they returned to London. The collector George Eumorfopoulos visited their studio show in 1927 because of forged Links with the sculptor Richard Bedford (a curator at the Victoria and Albert Museum) through the British School at Rome, and as a result Eumorfopoulos bought two of Hepworth's works. The couple moved to Hampstead in 1928, where Hepworth remained until 1939. They became leading figures in the 'new movement', associated with direct carving, along with Moore and Bedford. They held successful joint exhibitions in 1928 at the London Beaux Arts Gallery and Glasgow's Alex Reid and Lefevre. At the beginning of the 1930s they joined the London Group and the 7 & 5 Society. They had a son, Paul, in August 1929.

In 1931 Hepworth met Ben Nicholson - then married to Winifred Nicholson - who joined her on holiday in Norfolk. Ben and Winifred were exhibiting alongside Hepworth with the 7 & 5 at the time, along with Moore, John Piper, Cedric Morris, Christopher Wood and David Jones. Hepworth and Skeaping were amicably divorced in 1933. In 1934 Hepworth gave birth to triplets and she married Nicholson four years later.

Hepworth and Nicholson revealed their move towards abstract art in joint exhibitions they held in both 1932 and 1933, where Hepworth began experimenting in collage, photograms and prints. The couple visited several Parisian studios, having established links with the avant garde on the continent; they also joined Abstraction-Création. In 1935 they were instrumental in restricting the 7&5 to abstract work. Their pioneering work was cut off by the war, and Hepworth and Nicholson moved to St Ives in Cornwall. Here, domestic demands and a shortage of space restricted Hepworth to painting and small sculpture until she secured her own studio in Carbis Bay in 1942. Her first major solo exhibition at Leeds' Temple Newsam in 1943 was followed by a monograph by William Gibson, which along with two retrospective exhibitions helped confirm her post-war reputation. In 1949 she bought Trewyn Studio in St Ives, where she lived after her divorce from Nicholson in 1951. In 1954 she visited Greece in an effort to recover from Paul Skeaping's sudden death the previous year.

Hepworth was especially active within the modernist artistic community in St Ives during its period of post-war international prominence. Her choice of titles acknowledges her experience of the Cornish landscape. Hepworth also represented a link with pre-war ideals in a climate of social and physical reconstruction, shown clearly by her two sculptures for the South Bank site of the Festival of Britain in 1951. An increased demand and public commissions encouraged her to employ assistants for her work and also to produce editions in bronze.

Hepworth was awarded the Grand Prix of the 1959 São Paolo Bienal, as well as two honorary degrees, the CBE (1958) and the DBE (1965). Her work was displayed in a second Whitechapel exhibition in 1962 and she embarked on a European tour two years later. She was awarded the Freedom of St Ives in 1968 as an acknowledgement of her importance to the town. She died there after a long battle with cancer in May 1975 in a fire at her home. The studio became the Barbara Hepworth Museum in 1976 and, on coming under the Tate's aegis in 1980, secured an unrivalled collection of her work for the Gallery.

Hepworth's work is included in numerous public and private collections worldwide, including Deutsche Bank and the Yale Centre for British Art.