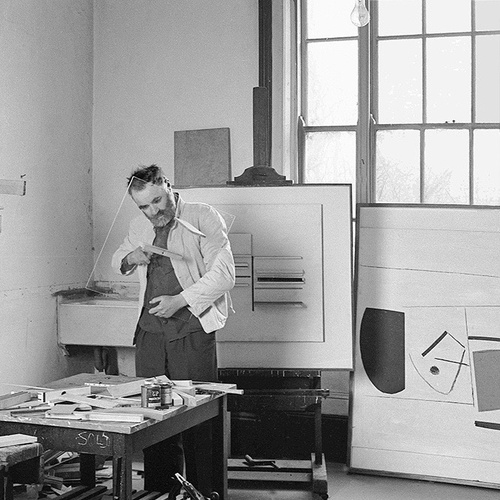 Victor Pasmore was a British painter of still life and landscapes, who later became a prioneering abstract artist and designer, producing collages, constructions and paintings.

Edwin John Victor Pasmore was born in Chelsham, Surrey. For ten years from 1927, he worked in London’s County Hall, whilst attending evening art classes at the Central School of Arts and Crafts. After 1930 he began to exhibit with the London Group, becoming a full member in 1934. In 1932 he also became a member of the London Artists' Association, with which he held his first solo exhibition in 1933. The following year he exhibited his representational pictures with the Objective Abstractions group at the Zwemmer Gallery.

Pasmore opened a teaching sudio in 1937 with Claude Rogers on Fitzroy Street, which relocated shortly afterwards, before becoming the Euston Road School under Graham Bell and William Coldstream. Under the example of the Impressionists, in the late 1930s, the school contributed towards a revival of naturalistic interest. By 1947, Pasmore had turned away from representational painting to abstraction, and later, his constructions. In 1966, he began a vast experimentation with printmaking which became a large part of his ouevre.

Retrospective exhibitions of Pasmore’s work were held at the ICA (1954), the Cambridge Arts Council Gallery (1955) and at the Venice Biennale, in Belgrade, Paris, Amsterdam, Brussels (1960) and Scandanavia (1961). In 1954 Pasmore became Head of Painting at Durham University and, the following year was appointed a Director of Architectural Design for Peterlee, a new town proposed for County Durham. That same year he took part in an exhibition at the Whitechapel Art Gallery, This Is Tomorrow, for which he collaborated with Helen Phillips and Ernö Goldfinger. In 1957 Pasmore worked with Richard Hamilton and Lawrence Alloway on an Exhibit, an installation of acrylic sheets and paper shapes which was shown in Newcastle and the ICA. Pasmore became a Trustee of the Tate Gallery in 1963.

Hastings Contemporary, formerly part of the Jerwood Foundation, hosted the retrospective 'Line and Space' in 2020.

Pasmore’s work can be found in major museums and public collections worldwide, including Tate Britain (UK), Royal Academy of Arts (UK), Museum of Modern Art (USA), British Council (UK) and Yale Center for British Art (USA). Institutions and private collections include Deutsche Bank and, formerly, that of David Bowie. A monograph on Pasmore was published in 2016 by Lund Humphries.