Nicholas Turner 'Forget me Not' 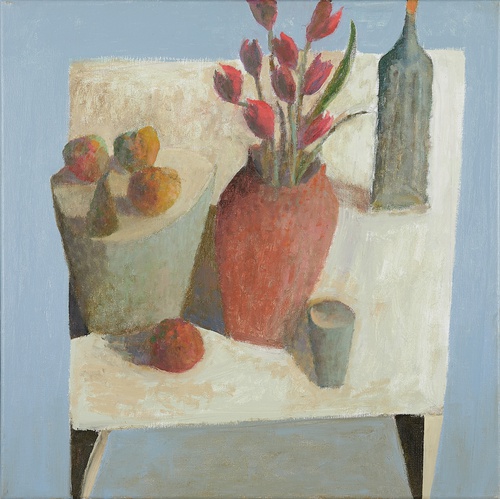 Nicholas Turner is a painter of landscapes, towns, harbours and interior still life subjects. His work is a quiet

reflection on the fundamentals of life, communicated with a sense of timelessness.

Though he may refer to thumbnail sketches as a starting point, his practice is spontaneous with the visceral application of dry paint directly onto an absorbent support, usually canvas or card. At a certain point, Turner will pause, and leave the work, returning to it weeks or months, sometimes years, later. As a dialogue with an image emerges, all but complete paintings may be discarded or worked over, their essences reworked and revised with variance in palette and technique.

Born in London in 1972, Turner completed a Foundation in Art and Design, before graduating from the University of the West of England in Fine Art in 1997. In 2003 he became of the youngest artists to be elected an Academician of the Royal West of England Academy, a position he still holds. Turner now lives near Abergavenny, Monmouthshire with his partner Sue, and exhibits both internationally and in the UK.

Nicholas Turner 'Forget me Not' catalogue

Works
Close
Back to exhibitions