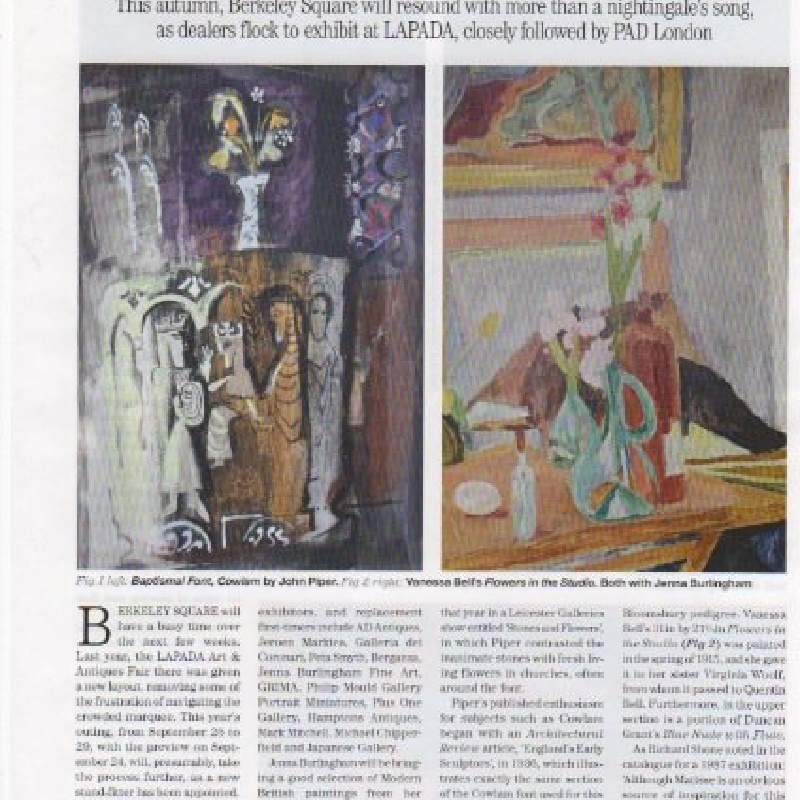 The gallery and two of our wonderful paintings were featured in Country Life magazine, as part of an article on the LAPADA Fair.

"This autumn, Berkeley Square will resound with more than a nightingale's song, as dealers flock to exhibit at LAPADA, closely followed by PAD London

Berkeley Square will have a busy time over the next few weeks. Last year, the LAPADA Art & Antiques Fair there was given a new layout, removing some of the frustration of navigating the crowded marquee. This year's outing, from September 25 to 29, with the preview on September 24, will, presumably, take the process further, as a new stand-fitter has been appointed. This is a Dutch company, Brederode, which is new to Britain, but whose work I have liked at BRAFA in Brussels.

Jenna Burlingham will be bringing a good selection of Modern British paintings from her Kingsclere gallery, including a dark, but strongly atmospheric, John Piper. This is his 26in by 21 3/8in mixed-media collage Baptismal Font, Cowlam, painted in 1952 and exhibited that year in a Leicester Galleries show entitled 'Stones and Flowers', in which Piper contrasted the inanimate stones with fresh living flowers in churches, often around the font.

Piper's published enthusiasm for subjects such as Cowlam began with an Architectural Review article, 'England's Early Sculptors', in 1936, which illustrates exactly the same section of Cowlam font used for this work. He compared such carvings with the work of Brancusi, Moore, Arp, Picasso and Miro. The font dates from about 1135.

Another Burlingham painting could hardly have a fuller Bloomsbury pedigree. Vanessa Bell's 31in by 21 3/4in Flowers in the Studio was painted in the spring of 1915, and she gave it to her sister Virginia Woolf, from whom it passed to Quentin Bell. Furthermore, in the upper section is a portion of Duncan Grant's Blue Nude with Flute.

As Richard Shone noted in the catalogue for a 1987 exhibition: 'Although Matisse is an obvious source of inspiration for this painting, still lifes by Cézanne in which the foreground objects are seen against the receding perspective of a room also influenced Bell's subtle, informal composition.' Since then, it has..."