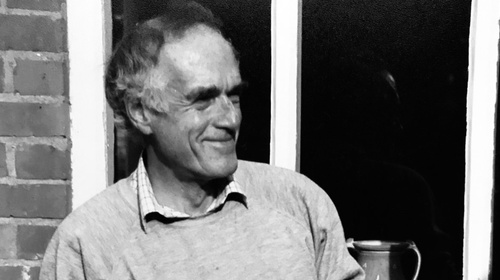 Alan Caiger-Smith is an influential British studio potter and writer.

Caiger-Smith was born in Buenos Aires, Argentina. He studied at the Camberwell School of Arts and Crafts, London (1947-49), before reading History at King's College, Cambridge (1949-52). In 1954 he began his formal training as a potter under Dora Billington at the Central School of Art and Design. The following year he established the Aldermaston Pottery in Berkshire with six assistants, including Geoffrey Eastop.

At this early point in his career, Caiger-Smith concentrated the Pottery's efforts on perfecting the use of tin-glaze and painted designs using red earthenware clay bodies, before exploring lustre firing on tin-glazes. The output of the Pottery was mostly functional and domestic ware, with a steady stream of individual commissions and one-off pieces. Inspired by British and Near-Eastern ceramic traditions, the work of Caiger-Smith and the Aldermaston Pottery has become world-renowned for tin-glazed earthenware and lustrous surfaces decorated with interlaced patterns of calligraphic brush strokes.

His work can now be seen in many public collections worldwide, including a feature at Reading Museum. Caiger-Smith is also a respected academic and he has released comprehensive books on the history of pottery, including 'Tin-Glaze Pottery' (1973) and 'Lustre Pottery' (1985). Caiger-Smith was Chairman of the British Crafts Centre (1974-78) and was awarded an MBE in 1988.