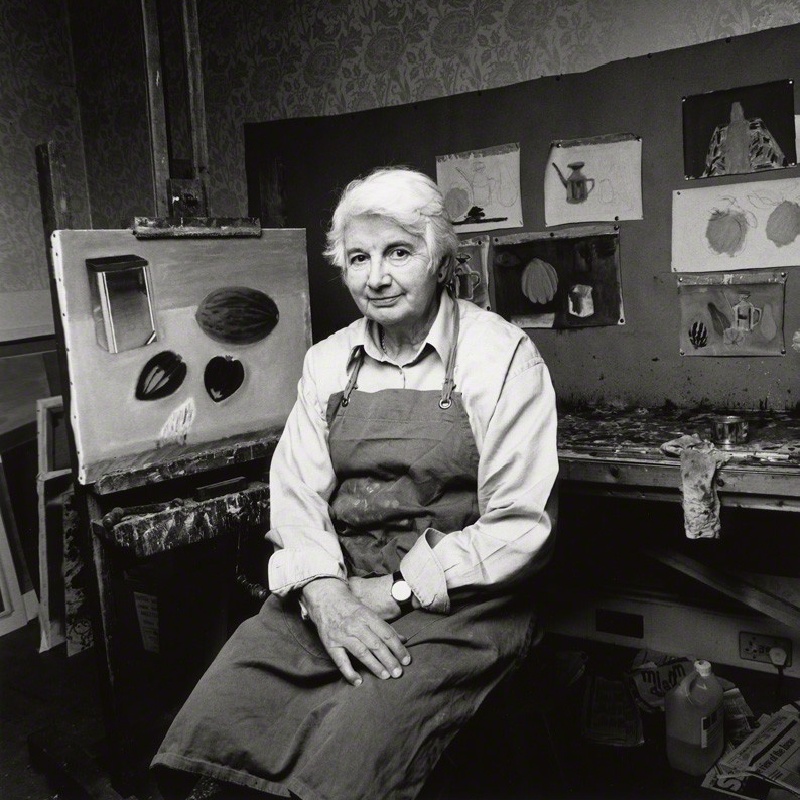 Dame Elizabeth Violet Blackadder is a British painter and printmaker, one of the most popular and respected artists at work in the UK today.

Blackadder was born in Falkirk, Scotland, and educated at Strone Village School, Dunoon Grammar School and Falkirk High School. Blackadder's father died when she was ten and she spent much of her childhood on her own, in part due to a keen appetite for reading. During her teenage years, Blackadder began meticulously collecting local flora, compiling her specimens by pressing and labelling them with their botanical Latin names, a fascination that was to surface in her celebrated paintings of plants and flowers.

She studied Fine Art at Edinburgh University from 1949, where her teachers included Penelope Beaton, Robin Philipson, William MacTaggart and William Gillies, who was to have the greatest influence on her work. The final year of Blackadder's Fine Art degree was spent at Edinburgh College of Art where she researched for her dissertation on MacTaggart, graduating in 1954 with a first-class degree. She was awarded a Carnegie Travelling Scholarship by the Royal Scottish Academy, which took her to Yugoslavia, Greece and Italy to study the art of the Byzantine and Quattrocento, as well as contemporaries like Georgio Morandi.

In 1956 she married fellow student John Houston and began to teach part-time at the College in 1962, where she continued until her retirement in 1986. During the 1960s she developed her interests in still life while continuing with her love of landscape by painting landscapes in France, Spain, Portugal and Scotland and acquired a growing reputation for her paintings of flowers. During her travels in France, Blackadder became enamoured by the work of Henri Matisse with the effect that her palette became somewhat brighter.

Her first exhibition was in 1959 at the 57 Gallery, Edinburgh, with further solo exhibitions being held at the Scottish Gallery, Edinburgh (1961-66), Mercury Gallery, London (1965-1999), as well as internationally including Florence and Toronto. A touring retrospective exhibition visited Aberystwyth, Brighton and Bangor in 1989.

Her still lifes show a distinctive break from the traditional Western organisation of space, with the artist considering the 'negative' space between objects carefully and often making this a key part of the final composition. Her objects are composed arrangements against a flat background, a block of colour that is made parallel to the picture plane. This can be said to limit distraction from the true subject(s) while also creating a pleasingly modern take on a long-admired type of painting. Blackadder works in oil and watercolour ‘with no particular preference’ for either.