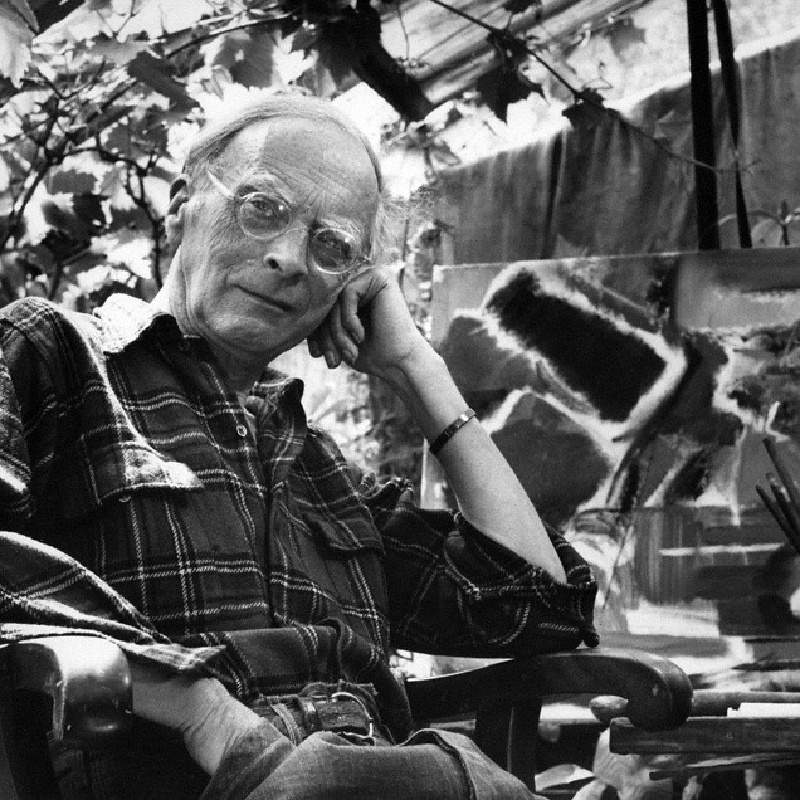 Ivon Hitchens was a British painter, mainly of landscapes.

'Setting up canvas and box in all weathers, I seek first to unravel the essential meaning of my subject, which is synonymous with its structure, and to understand my own psychological reactions to it. Next I must decide how best it can be rendered in paint, not by a literal copying of objects but by combinations and juxtapositions of lines, forms, planes, tones, colours etc., such as will have an aesthetic meaning when put down on canvas ... My pictures are to be listened to.' (The Artist, personal memorandum, c.1954)

"Hitchens was born in London, son of the painter Alfred Hitchens, and studied at St John's Wood School of Art (1911-12) and the Royal Academy Schools (several years on and off between 1912 and 1919). In 1920, he became a founder member of the progressive 'Seven & Five Society' and was the only artist to belong to it throughout its entire lifetime until its demise in 1935. During this time, he experimented with pure abstraction (he exhibited as one of the 'Objective Abstractionists' in 1934), but by the late 1930s he had created a highly distinctive style on the borderline between abstraction and figuration in which broad, fluid areas of lush colour, typically on a canvas of wide format, evoke but do not represent the forms of the English countryside that were his inspiration. In 1940, following the bombing of his London studio, he settled permanently at Lavington Common, near Petworth, in Sussex. His work altered little from then, apart from the fact that his palette changed from naturalistic browns and greens to more vivid colours such as bright yellows and purples. Contrary to what often happens when an artist remains constant in one style over several decades, Hitchens's work did not become stereotyped or banal. In addition to landscapes, Hitchens painted flowers and figure subjects (usually nudes) and he did several large murals, for example at Nuffield College, Oxford (1959), and the University of Sussex (1963). His work is represented in the Tate Gallery, London, and many public collections. His son John Hitchens (1940- ) is also a painter, mainly of landscapes and flower pieces."

Other members of the Seven and Five Society included Henry Moore, Barbara Hepworth, John Piper, Cedric Morris, Ben and Winifred Nicholson, Christopher Wood and David Jones. They were the a driving force in the 1930s London art world. As with many in the group at that time, Hitchens escaped metropolitan life to spend more time in the countryside where he could throw off social conventions and embrace their new modernity. His move to the country prompted, as Clive Bell wrote in the New Statesman in 1942, 'a great leap forward' in his painting.

The most definitive monograph on Hitchens was written by Peter Khoroche and the most recent edition was published in 2020 by Lund Humphries. David Bowie owned a number of Hitchens' paintings from throughout his career. Other collections include the Courtauld.