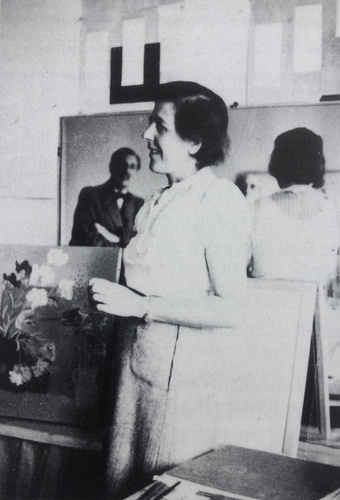 Winifred Nicholson was a British painter.

Born in Oxford as Rosa Winifred Roberts, from early on in her childhood she was encouraged to paint by her grandfather, the artist and friend of the Pre-Raphaelites, George Howard, Earl of Carlisle (a portrait of the young Winifred by Howard is reproduced in 'Unknown Colour', 1987). In 1912 she began her formal studies at the Byam Shaw School of Art, London, later attended by Eileen Agar.

Winifred was 27 when she met the English painter Ben Nicholson, in November 1920, a figure who was to be a huge influence on her painting and on British art. They married within the year and worked alongside each other in Italy, France, Devon and Cornwall (including St Ives) and spent their winters at a villa among vines on the mountainside above Lake Lugano in the Italian-Swiss Alps, a place they had discovered on their honeymoon.

In Paris, Winifred and Ben saw works by Derain, Van Gogh, Cézanne, Matisse and Picasso. They particularly admired the primitivism of Gauguin and Rousseau. In 1923, Winifred and Ben exhibited alongside each other, the first of many joint exhibitions, at Paterson Gallery in London. The following year they acquired an old farmhouse, Bank's Head, in Cumberland. The home became a source of huge inspiration for Winifred and remained so for many years. Artists such as Paul Nash, Ivon Hitchens and Christopher Wood visited the Nicholsons at Banks Head and shared Winifred's love of the farmhouse and surrounding countryside.

Winifred joined the '7 & 5' Society in 1925 and exhibited there for a decade alongside Ben, Hitchens, Wood, Henry Moore, John Piper, Barbara Hepworth and David Jones. In 1927 she was seriously injured when she fell through a trapdoor while hanging an exhibition at Beaux Arts, London. Thankfully, she made a full recovery and was given her first solo exhibition at the Leicester Galleries in 1930.

In the 1920s Ben Nicholson had, with the couple's friend and fellow artist Christopher Wood, 'discovered' the painter Alfred Wallis before Wood killed himself in 1930. Winifred and Ben had three children Jake was born in 1927, Kate in 1929, and Andrew, author of her monograph 'Unknown Colour', in 1931.

After separating from Ben Nicholson in 1932, who had fallen for Hepworth, Winifred moved with the three children to Paris, though the two maintained a strong relationship for the rest of their lives. In France, Winifred met many artists including Alberto Giacometti, Jean Arp, Brancusi, Wassily Kandinsky, Naum Gabo and Piet Mondrian. By 1938, with war looming Winifred returned to Britain, namely her stone farmhouse in Cumberland, Bank's Head, also persuading Mondrian to travel with her to escape the threat of fascism.

Winifred was a keen traveller and, together with the poet Kathleen Raine, visited the Hebrides and Western Scotland on several occasions during the early 1950s and, in 1953, she exhibited works from these trips in Edinburgh. She also visited the Scillies, Orkney and Catalonia in that decade and made numerous trips to Greece in the 1960s and '70s.

In 1969 a retrospective exhibition was held at Abbot Hall Art Gallery in Kendal. Shortly afterwards, 12 of her pictures were shown in a touring exhibition that opened at the Hayward Gallery, London. In 1972 Winifred Nicholson was given a solo exhibition at Kettle's Yard, Cambridge. In 1979 she was given a retrospective exhibition, organised by the Scottish Arts Council, which travelled from Glasgow to Edinburgh, Carlisle, Newcastle and Cornwall. A Tate Retrospective came in 1987, the year of the Faber and Faber monograph. In 2014, her grandson Jovan curated an exhibition of Winifred and Ben's work at the Dulwich Picture Gallery, 'Art and Life'.