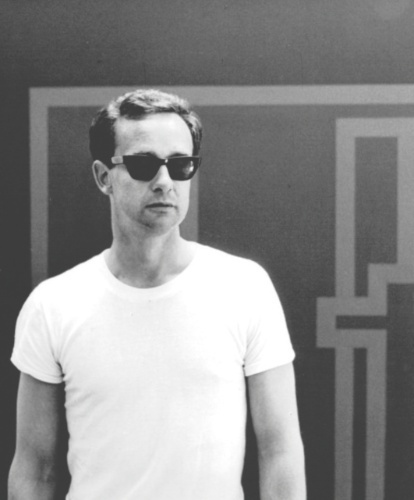 Robyn Denny was one of a group of young artists who transformed British art in the late 1950s, leading it into the international mainstream. Reacting against the mainstream St Ives School of landscape-based painting and inspired by Abstract Expressionism, American films, popular culture and urban modernity, they saw abstract painting as their only conceivable route.

He was born in Abinger, Surrey, the third son of Henry Denny, a clergyman, and his wife Joan, whose family name was also Denny. He was educated at Clayesmore school, Dorset.

Among the paintings Denny created at the Royal College are rudimentary images of heads, indebted to French Tachisme, with dripped and dribbled paint. These were interspersed with abstract collages and large gestural paintings which display the broad gestures and bold marks of American Abstract Expressionism, exhibited in London in 1956 and 1959. In 1969, he organised an exhibition for the Arts Council on the American artist Charles Biederman, who for over 20 years worked exclusively on vividly coloured abstract reliefs. This experience coincided with a new intensity of colour in Denny's work, shifting from rich, dark harmonies to high, bright contrasts, from a sense of twilight to daylight. In 1981 Denny moved to Los Angeles, but returned to London in 1986.

In California, Denny's painting again changed radically. In the late 1970s, the acrylic 'Moonshine' drawings had incorporated scratch marks, leading eventually to a series of large monochrome paintings where a concentrated cluster of scratching rests, with shockingly disruptive impact, on a thin horizontal: a datum line, never a 'horizon'. The acrylic surfaces are delicate and subtly modulated, constructed from up to 30 layers of pigment applied until it is intensely rich, absorbing the eye and the attention.