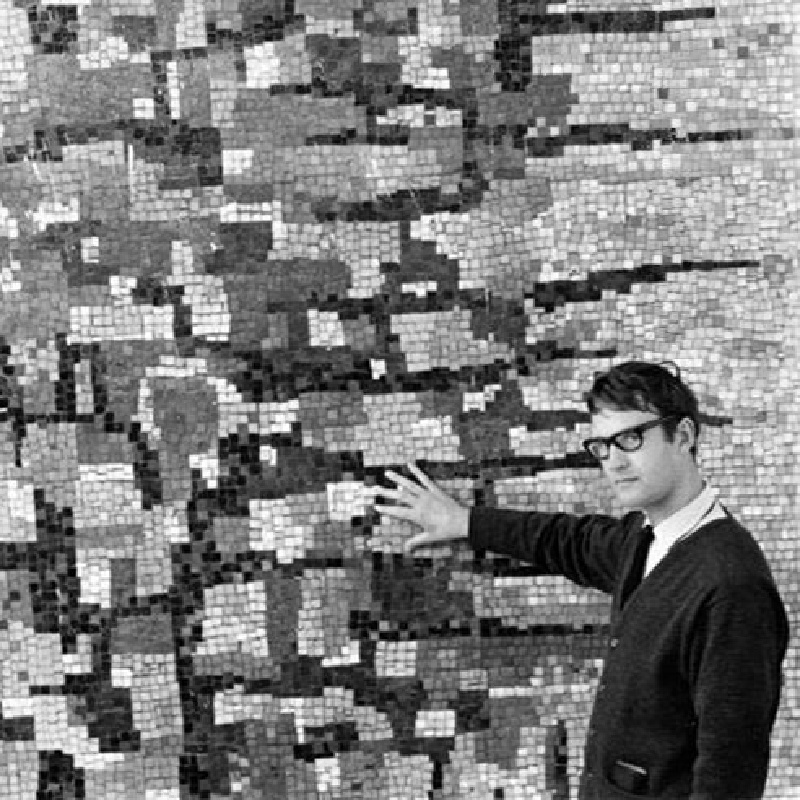 Richard Allen was born in Worcester in 1933. Influenced by his father, he attended Shropshire Institute of Agriculture where he studied for a National Diploma. From there he began an interest in art, since the College shared buildings with Worcester School of Art. Allen took national service in 1952 during the Korean War, serving as an engineer. He returned to Worcester in 1954 to study for his A levels and NDD, after which he attended Bath Academy of Art in 1957. He embraced Bath's unconventional teaching of that time and developed a keen interest in abstract painting. In 1959, his last year at Bath, he was commissioned to make a 15 x 9 foot abstract mosaic for a Wiltshire college, in which the first signs of Allen's grid construction, and blocks of colour within a grid, are seen to appear. In 1960 he won an Italian Government Scholarship in Art to study mosaic in Ravenna. He married fellow Bath Academy of Art student Eve laurens the next year, and began teaching part time. He taught at Croydon College of Art for eight years, during which time he began working on his Op Art paintings and was awarded the title of Commonwealth Scholar in Art and Architecture. Allen started experimenting with line, colour, optical effects and the relationship between art and science. In 1967 he had his first solo exhibition at the University of Sussex. In 1971 he was invited by Malcolm Hughes to join the Matrix group of artists, whose exhibition opened at the Arnolfini Gallery that year which led to a further exhibition at the Whitechapel gallery the following year. In 1972 Allen returned to drawing, namely making large-scale charcoal works on canvas. His work at this time was still very much based on the grid and cross. His work was included in the Hayward gallery British painting Exhibition in the mid 1970s, and was also displayed in a solo exhibition at the London Institute of Contemporary Arts. Allen moved to Jersey in 1977, where he continued working with charcoal and exhibiting internationally. In 1991 he returned to England and began working on his "white paintings", having not worked with colour for twenty years, which were to be his last works. Shortly after his wife Eve died in 1997 he was diagnosed with Motor Neuron Disease. Allen began working with specially adapted computer software but the rapid onset of the disease prevented him from making any progress. Richard Allen died in 1999.